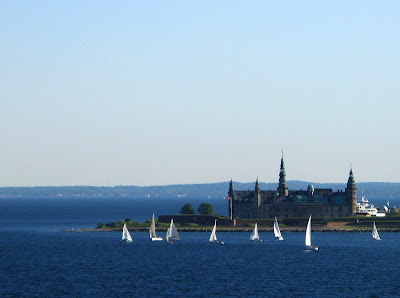 When I was planning this trip, I almost signed up for a tour from Copenhagen called "Castles of North Zealand," focusing on Kronborg Castle in Helsingør, aka Elsinore. How could an English major resist seeing Elsinore?

But I decided my limited time in Denmark was much better spent walking around Copenhagen and going on a boat ride through the canals, instead of sitting in a tour bus for an hour each way. (And thanks to Paul for the advice -- glad I listened.)

Since the ship is too large to head straight down into the Baltic from Copenhagen, we have to backtrack and go back the way we came late last night, sailing north through Øresund, the strait between Denmark and Sweden. So I got to see Kronborg after all.

Funny how most productions of Hamlet leave out the sailboats.