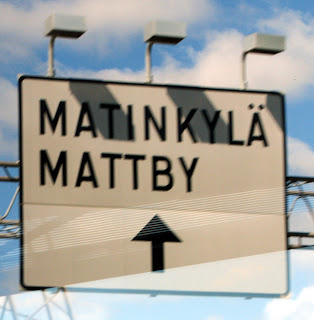 But I don't mean awful in the way Mark Twain did when he complained about German. Awful as in inspiring awe.

I've been to Hungary, and I've been to China, so this isn't my first encounter with a non-Indo-European language, but I've never seen anything that looks or sounds quite like Finnish, full of double letters and umlauts and words that are several inches long. Swedish is the second official language of Finland, so all road signs and street signs are in both Swedish and Finnish, and the Finnish has the effect of making Swedish look perfectly comprehensible.

For example, the Temppeliaukio church is named for its location, Temple Square in English, Tempelplatsen in Swedish. (The church is in a neighborhood called Töölö, which manages to have three umlauts in a five-letter word, something I don't think any Indo-European language can accomplish. Take that, German!) Kruununhaka becomes Kronohagen in Swedish. Vanhakaupunki is Gammelstaden.  And Käpylä  is plain old Kottby.

After hours of riding around trying to parse the signs, I started to understand some of it: Saari is apparently the equivalent of the Swedish holm or "island". Kaupunki means "town" or "city." Mostly I was completely lost.

I was especially interested in the accents. Both Eero and the woman who gave the tour at Hvitträsk spoke flawless colloquial English, and it was very hard to discern exactly what made them still sound so foreign. What does a Finnish accent sound like anyway? It wasn't in the vowel sounds, I decided. It was more that the rhythms and stresses just sounded a little off, a little flat. And somehow I want to say "deep" as though they spoke from somewhere below their throats, although there was nothing unusual about the pitch. Maybe it was just all the forests of birch around us, but I kept thinking of elves and ents, of Treebeard saying Hroom! That's what it sounded like to me. Although maybe it's just that the written language looks like a dialect of Elvish that had me thinking I'd somehow wandered into Middle Earth.
Posted by Kathleen at 5:30 PM

Well, Tolkien was inspired by Finnish and Welsh while constructing his Elvish.

BTW they are not "umlauts" a and ä and o and ö are totally separate letters, it is not an affliction on the original, just like å is its separate letter and has nothing to do with a.

Oh, the Finnish one
http://www.youtube.com/watch?v=eV47telk2qI

Much difference with the Quenyan?

I must thank you for the efforts you have put in penning this blog.
I really hope to check out the same high-grade content
from you in the future as well. In truth, your creative writing
abilities has motivated me to get my own, personal blog now
;)
My website ... Toddler Hitting

A very good article, but Finnish is NOT an indo-european language. It is related to Estonian and hungarian (so say linguists) but no other living languages.

Estonian has "töööö", meaning "work-night", which has four "umlauted" vowels in a row!

That is my new favorite word!

But how do you pronounce it -- do all the vowels in a row just make one very long sound?

Actually Finnish is related to several living languages that are spoken in Finland and other countries. Finno-Ugric language family will show you the way.