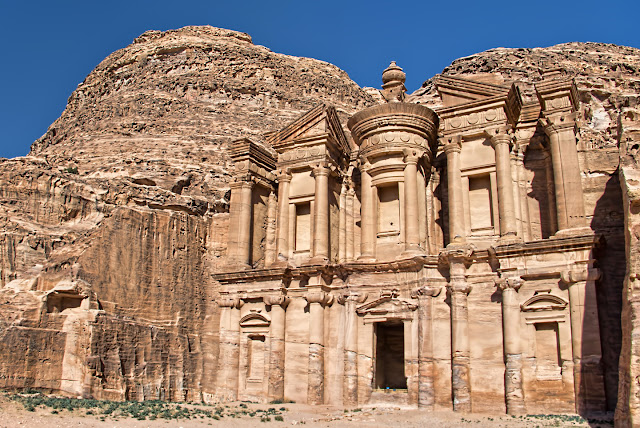 
If you were starting to think I'd never get here, that was definitely how I was feeling the day I was there. Riding Suzo up all those steps (there are either 850 or 900 depending on which source you choose to believe) was only the beginning. What the guides hadn't mentioned to me before I agreed to this madness was that the mule can only take you part of the way; the last part of the climb isn't safe for mules so you have to do it on foot.

Well, that was disconcerting, but it actually wasn't that bad -- maybe fifteen minutes, pausing to catch my breath a couple of times. (Coming down was a different story, as it usually is with my knees. The steps are broken and sloped and covered with slippery sand, but as I obviously survived I won't complain now.)

There are no sneak peaks while you're climbing; even coming down the last part of the trail, all you can see is the plaza, and the hills on the other side.  And then you come around that last bend. Wow. Just, wow.

Unfortunately there are no people in this picture for a sense of scale. It looks human-sized here -- the stone version of a manor house in some English village -- but the Monastery is much, much larger than the Treasury. It's about 160 feet tall; the doorway is more than 25 feet. The size makes it a little unnerving; if someone were watching from behind those stone windows, you really, really wouldn't want to know. But I also felt oddly privileged to be there, as though I were presenting myself to the kings who used to worship in the temple that it once was.

There's a small cafe on the other side of the plaza, and I sat on a cushion in the sun and sipped a lemonade with mint, and it was one of those perfect moments in your life that you just want to grab onto and never let go of.