A word about logistics 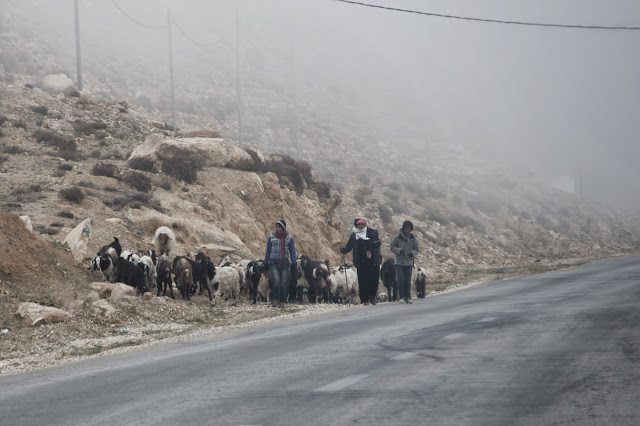 Shepherds leading their flock through the morning fog on the highway between Petra and Wadi Rum.

I've already written about the day tours I took in India and Abu Dhabi, mostly arranged through Viator, but in Jordan I went through a local tour company, Wadi Rum Classic Tours, that I found online, to handle all the arrangements from the minute I left Amman until I came back three days later. They seemed reputable, had good reviews, and didn't require any payment in advance, and since I really didn't want to try to figure out the logistics of getting to Petra and Wadi Rum on my own in the little time I had to plan, I booked.

And everything went exactly as promised --  which, given the number of moving parts involved, was really quite impressive. The first day, I was picked up at my hotel in Amman and driven to Wadi Musa, then to the entrance to Petra, where I was turned over to the local guide. The next day, a different driver picked me up at my hotel in Wadi Musa and drove me to Wadi Rum, where I again met a local guide. He dropped me at the Bedouin camp after a day of touring, and yet another driver picked me up there in the morning and drove me out of Wadi Rum, where we met the driver who took me back to my hotel in Amman.

And after a while, it just started to seem perfectly natural -- “Oh hi, you're my driver now? Nice to meet you. Let's go.” I never had a moment's uneasiness about traveling as a solo woman with all these strange men; Jordanian culture has a very strong tradition about hospitality and the treatment of guests, and it turns out that they consider tourists to be guests. Was I comfortable? Did I want a coffee? Did I need a bathroom? We talked about our families, we talked about King Hussein and King Abdullah and Donald Trump; we talked about finding places to graze sheep in a drought and the advantages of moving to a cave for the summer (that was the Bedouins); we talked about snorkeling in Aqaba and why it's the best place in Jordan to get a deal on a new phone (that was Abdullah, the young man who drove me on the Amman to Petra leg).

It gave a chance to feel I was really experiencing Jordan, instead of just dropping in, visiting a few ruins and flying out again.