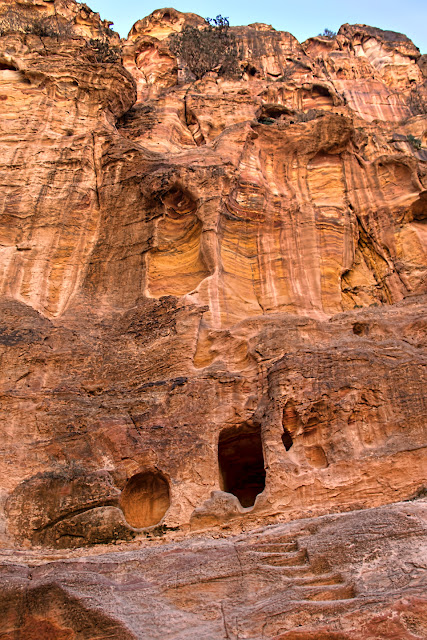 There are caves -- some natural, most man-made -- in the rock walls throughout Petra. Many of them are tombs, but some were probably dwellings.

Because so many of the remaining structures in Petra are tombs, it's easy to think of it as a necropolis, but it was a thriving city where people lived and worked.

That niche by the cave entrance is also something that you see a lot along the Siq. The primary god worshipped by the Nabataeans was Dushara, Lord of the Mountain. And it was almost literally the mountains themselves that they reverenced. The statues of Dushara are cubes of stone, sometimes with crude circles for eyes, but usually featureless. Sometimes they actually carved away the entire top of a hill or mountain, leaving a cube-shaped “god block” behind.

Later, under Greek influence, they anthropomorphized the gods and started to add human features. But Petra makes so much more sense when you understand how the Nabataeans felt about these mountains, and why they would create their city by carving rather than building.