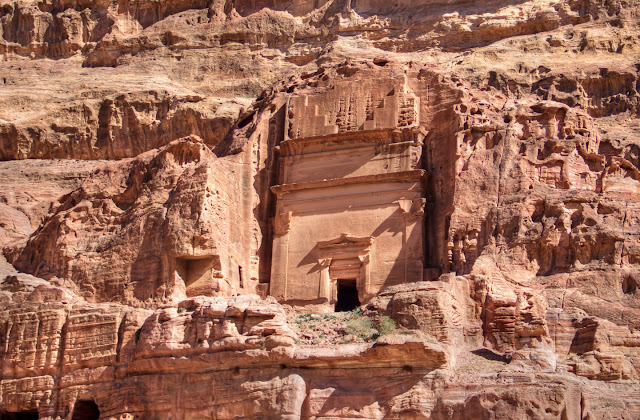 I wanted to include one more tomb, because in this picture you can see the crowsteps above the pedestals on the facade. It's a common motif in Petra; it may have been used only on tombs, as my guide said, or, since we don't really know the purpose of every building here, it may just have been a pattern that they liked (and that was easy to carve.)

But although the more elaborate tombs and temples clearly show influences from Greece and Egypt, these steps look very Nabataean to me. If your God is usually represented by a plain pillar or block of stone, often on top of a mountain, then steps would have an obvious religious significance. And they certainly carved enough of them into the hills around the city -- real steps, I mean, not the decorations. I climbed a couple hundred of them at least, and rode a mule up several hundred more.