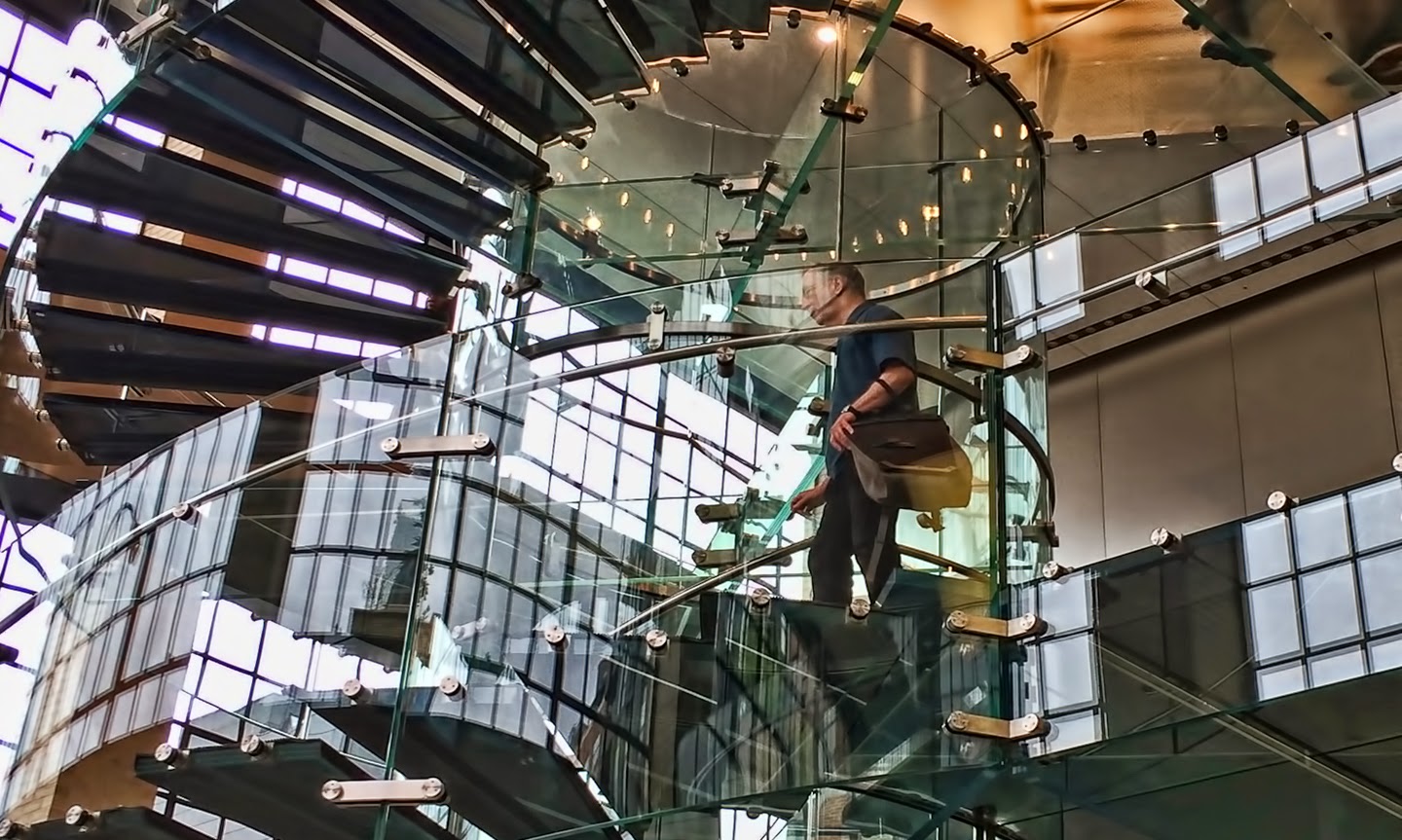 The staircase at the Apple store on 14th Street in New York.

This is my first iPhone picture -- cropped, and tweaked a little in Photoshop, but as good as a lot of pictures I've taken with high-end point and shoots. I'm not surprised; the National Geographic photographer on the trip to the Galapagos last year was experimenting with iPhone photography and took some beautiful pictures with his phone.

But I don't really need another camera. Or, more accurately, I really don't need another camera. And I don't need a phone. My employer gives me a Blackberry, and it's more than sufficient for the little use I make of a mobile phone. I did want another music player since my iPod was stolen last year, but I haven't been in any great hurry to replace it. So although I decided several months ago that having a phone to replace my iPod and provide a decent camera that I'd always have with me meant that I would probably be buying an iPhone, it was low on the list of priorities, somewhere around Rent a storage locker for off-season clothes and Learn to make spaeztle.

(I'm also put off by the way the gadget-obsessed have turned Apple products into an embarrassing fetish. I actually know people -- real people, with brains and everything -- who find owning a new model of iPhone on the day it comes out absolutely necessary to their health and happiness. I like Apple. I'm typing this on a MacBook. But if you asked me which particular model I own, of just about anything, I couldn't tell you.)

So it was ironic that when I finally went to Apple last weekend and said, basically, "Fine! I give up! Give me an iPhone!" they said No. I'd picked out the phone, picked out the storage capacity, picked out the data plan, picked out the protective case. All that was left was paying for everything and activating the phone, and the carrier, who shall remain nameless here (hint: rhymes with horizon) said, We don't think so. They needed more information first and they'd get back to me within 48 hours.

I'm going to skip over the tedious approval process that ensued. First World problems. White Whines. Affluent consumers deprived of their toys. Finally I passed muster, and I went back to Apple yesterday to pick up my iPhone -- which, honestly, was looking much more desirable now that no one wanted to let me buy one -- and found that I had to start the entire process from scratch. Pick a phone. Pick a plan. Pick a case. I actually cried.

I think it's only fitting that when I used Siri for the first time, trying to create a reminder to pick up my laundry by 7 tomorrow,  pick up laundry became pick up one drink.

As if one would be enough.