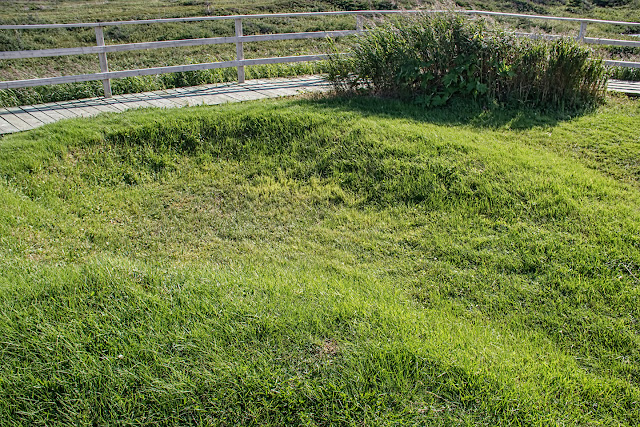 This depression marks the location of the smithy's forge.

From Wikipedia:  Two Icelandic sagas, commonly called the Saga of the Greenlanders and the Saga of Erik the Red, describe the experiences of Norse Greenlanders who discovered and attempted to settle land to the west of Greenland, which they called Vinland. The sagas suggest that the Vinland settlement failed because of conflicts within the Norse community, as well as between the Norse and the native people they encountered, whom they called Skrælingar.

The publisher of a newspaper in St. John's had suggested L'Anse aux Meadows might have been the site of a Vinland settlement back in 1914, and at least one archaeologist had done a test excavation in the 1950's. The husband-wife team of explorer Helge Ingstad and archaeologist Anne Stine Ingstad finally found the remains of Norse buildings in 1960, and carried out excavations for the next eight years.