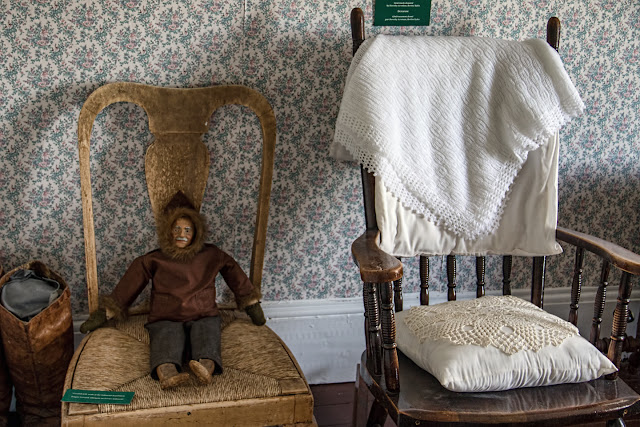 There are more feet than shoes in many families in Labrador, and we are frequently called upon to amputate legs which have been frozen.

I've been haunted by that line since I first read it, at the Grenfell Center in St. Anthony. By that point I had no illusions about how hard life in Newfoundland and Labrador has been for most of its history. Every old cemetery was full of headstones testifying to the dangers of making a living on the ocean --  Drowned Age 16, Drowned Age 19, Drowned Age 30 -- and there were monuments to more spectacular tragedies, shipwrecks and seal hunters trapped on ice floes, that killed hundreds. And I'm sure all that hardship is part of the reason that so much of Newfoundlander culture seems like a celebration, the bright colors and rollicking music and dry humor and cookbooks celebrating 100 ways to cook bologna.

I'd never heard of Dr. Wilfred Grenfell until we visited St. Anthony, although his life was monumental by any standard. And I realize that's part of what I love so much about travel. It's not just getting to see beautiful scenery and historic sites and being able to brag that you've eaten crocodile or camel or kangaroo (or, if you happen to be in Newfoundland, fish and brewis or moose with honey and garlic.) But there are so many stories you'll never hear unless you seek them out, in a small museum full of the relics of lives past, or in the reminiscences of a tour guide or a waitress or the woman sitting next to you on the bus who asks where you're from.

Grenfell first came to Newfoundland as a medical missionary in 1892, and he made it his life's work, first with hospital ships visiting coastal towns once a year, then with establishing hospitals in the larger towns in Labrador and northern Newfoundland, followed by schools and orphanages and cooperatives. He died in 1940, but the Grenfell Association operated until 1981, when a governmental agency took over all of the operational responsibility.

He was as tough as the people he served -- in 1908, he was traveling by dog sled to operate on a sick boy and crashed through the ice while taking a short cut crossing a bay. He and the dogs managed to swim to an ice pan, where they were trapped without food or water or dry clothes. He survived for two days by killing and skinning three of the dogs to make a makeshift fur coat and dealt with his thirst by chewing a rubber band. After he was rescued his feet were so badly frostbitten he couldn't walk but he still managed to perform that urgent surgery, successfully, two days later.

That little Grenfell doll is in his house in St. Anthony which is now a museum. And there's a plaque there in memory of the three dogs -- Moody, Watch and Spy -- who died on the ice.

And with that story, I'm leaving Newfoundland. There are a few more random photos that may show up at some point, but I'm heading west next weekend and it's time to wrap this up before I have new stories to tell.