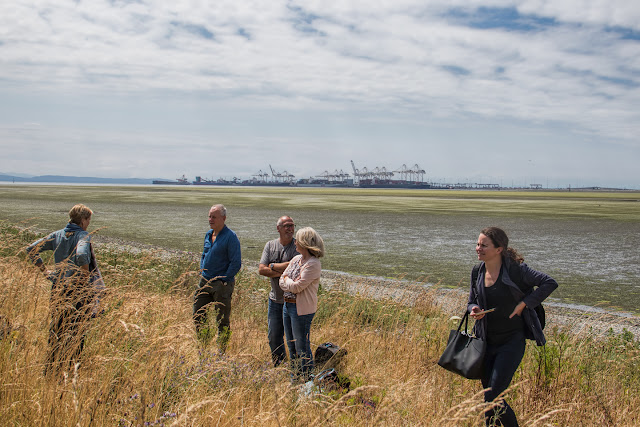 I'm wide awake after not nearly enough sleep, listening to the gulls crying in the harbor from my hotel bed in Victoria.

I still have almost an hour to kill before they start serving breakfast, so here's a brief recap of yesterday's adventures. It's a four-hour trip from Vancouver Airport to Victoria -- a bus drives you onto the ferry, you disembark and enjoy the scenery for an hour and a half, then reboard the bus for the 40 minute drive to downtown Victoria. The buses leave every two hours, and I had reserved the one scheduled to depart two and a half hours after my plane landed.  That would give me plenty of time to go through immigration and collect my luggage, and possibly grab a coffee or something to eat before settling in for the trip to Victoria.

The flight was uneventful, and we actually landed a few minutes early. So far, so good. I was scurrying along the corridors on my way to Immigration when I noticed a crowd up ahead blocking the way, and a guard herding us over against the wall into what was apparently a feeder line leading to the actual Immigration area. Vancouver has become a very popular destination for vacationers from Asia, and I had heard that the immigration lines could be very long. This was apparently an understatement, but I had plenty of time so I wasn't worried.

We shuffled past the main line and it was impressively long -- a huge room with a line that snaked back and forth into twenty long columns of people. (Yes, I counted. There wasn't really anything else to do.) Then we turned a corner and there were ten more columns to the line! At least it was moving fairly quickly, and I still had plenty of time to make my bus, so I just kept my head down and trudged along for what turned out to be more than half a mile of line. (Yes, I checked my Fitbit. There wasn't really anything else to do.)

Finally, after 45 minutes, I got close to the end and learned that the line I had been standing in wasn't actually the immigration line; it was the line to get on the escalator to go down to Immigration and stand in the REAL line. I did not count the columns there. By that point I was dizzy from all the switchbacks, and my backpack was digging into my shoulders and I just focused on getting to the end of the row, turning, and getting to the end of the next one, and fantasizing about the lengths I would go to to avoid ever having to go through immigration in Vancouver again. For example, would I be willing to fly into Saskatoon, go through immigration there, then take a thirty-hour bus ride across the prairies to British Columbia? Why yes I would.

Retrieving my suitcase turned out to be the next hurdle. I only had twenty minutes before my bus left, and I had been in line so long my flight no longer appeared on the information board so I had no idea which carousel was mine, and I had to wander around and check each one. Finally, suitcase! Ten minutes to go! A quick pee, a Kind bar and a bottle of water from a newsstand which was going to have to hold me until I got on the ferry, and I made my bus with almost a minute to spare.

I settled back in the seat, caught my breath, and learned that due to mechanical difficulties -- a polite way of saying that the engine wouldn't turn over -- we were waiting for a replacement bus and wouldn't be leaving immediately after all. The replacement bus turned out to be a borrowed Air Canada shuttle, and after somehow managing to cram all of our luggage inside, we raced off to catch the ferry.

And the shuttle caught on fire half a mile from the ferry terminal -- I am not making this up, as Dave Barry would say -- and we found ourselves standing by the side of the highway with all of our luggage (see picture above), while the BC police secured the scene and attempted to commandeer a third bus to take us the rest of the way.

We missed the ferry. It was a two hour wait for the next one. But I got here eventually, and the little I saw of Victoria through my half-closed eyes looked quite charming.

Now I need my breakfast.