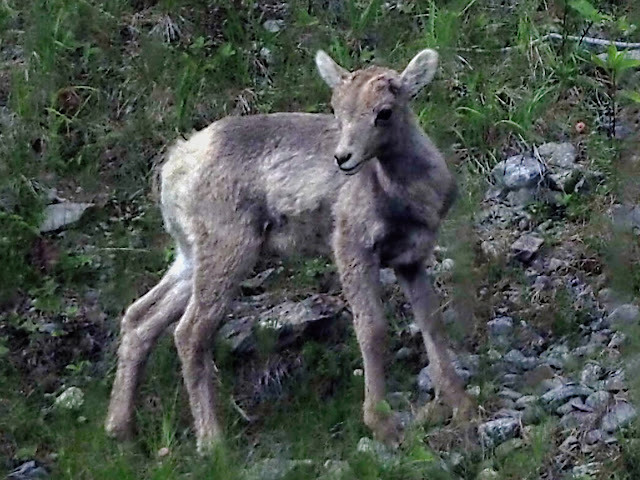 I took far too many pictures yesterday to even begin to process them, so here's an easy one: a baby bighorn sheep. It's dark and not very detailed since I took it over someone's shoulder through a bus window, but that face is just too adorable not to share.

We also saw several black bears along the road, and so many idiotic candidates for next year's Darwin Awards that everyone in our group was furious. People were getting out of their cars and running to where the bears were, then trying to pose for family portraits and selfies with the bears in the background. One mother bear with two cubs was at the bottom of a short, steep slope and a man crouched halfway down only a few feet from the cubs grinning into his phone. If he had slipped, or if Mama Bear had decided that he was too close to her babies and she attacked, my sympathies would definitely have been with Mama.

But the bear would still have been euthanized for attacking a human, in a situation that was entirely the stupid human's fault.
Posted by Kathleen at 10:41 AM