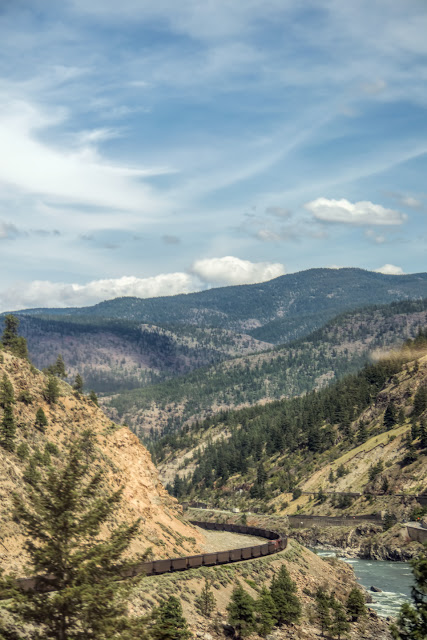 It was a very, very long day today -- we left our Vancouver hotel at 6:30 this morning, and our train didn't crawl into Kamloops until 8:00 tonight -- and we have another long train ride tomorrow, so just a quick post and one picture tonight.

We're not in the Rockies yet, but it was mountains all day while we followed two rivers, the Fraser and the Thompson, north and east. We saw at least a dozen bald eagles, some herds of bighorn sheep, small towns both thriving and abandoned, and dozens of freight trains hundreds of cars long. The one in this picture was on the other side of the river but late this afternoon we had to wait several times until freight trains that were competing for the same track we were using had gone past, part of the reason we got in so late this evening.
Posted by Kathleen at 1:13 AM