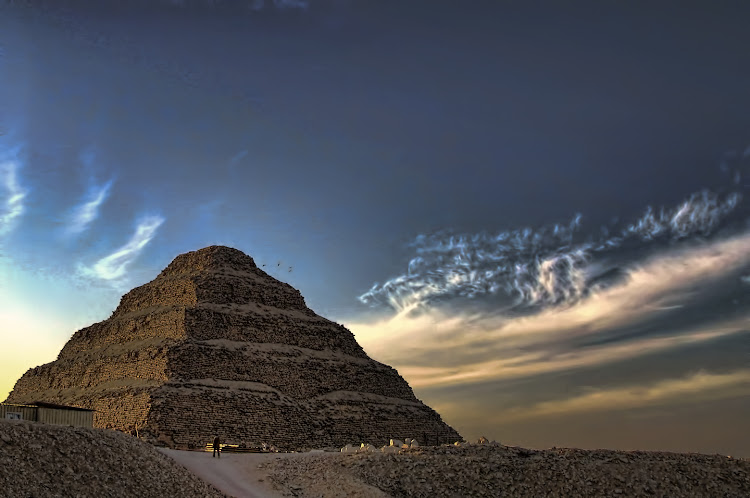 I am currently in the middle of five different books (not including the textbook I'm supposed to be reading but have yet to open), at least half a dozen TV shows, and a couple of movies. I am having a hard time paying attention to anything for more than five minutes.

But I did read this article from The Guardian about the trove of fifty sarcophagi recently discovered in Saqqara, Egypt, after more than a hundred had been found just a few months ago. You wouldn't think there could possibly be that much undiscovered treasure left in Egypt after all these centuries, and although these sarcophagi are from the so-called New Kingdom and so a mere 3000-3500 years old, they're almost unimaginably old compared to, well, almost anything else. And they just keep finding them!
That inspired me to look for my own pictures from Saqqara. I only posted a few of them at the time, still being new at this whole blogging thing, so here's a picture of the Step Pyramid, the most famous landmark there. It's even older than the pyramids at Giza, and more than a thousand years older than those sarcophagi everyone's so excited about.
I only had a point-and-shoot camera in those days, and a limited number of software tools, and I spent a couple of happy hours this afternoon cleaning up and cropping this image and making the lighting more dramatic. Now maybe I can settle down to re-reading The Two Towers for the tenth or so time feeling as though I've accomplished something today.
Posted by Kathleen at 5:32 PM