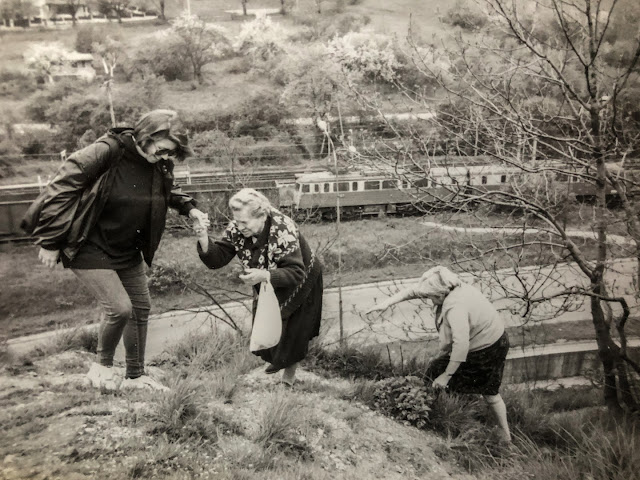 In 1995, I traveled through Eastern Europe with my friend Jayne. In Krakow, we visited the factory owned by Oskar Schindler  -- the factory scenes from the movie had actually been filmed there. It was still a working factory then -- it's now a museum -- and our tour guide was the son of one of the workers, who happened to be visiting his mother and spoke some English.

Afterwards we climbed this nearby hill, where they'd filmed the scenes of Schindler on horseback watching the purge of the ghetto below. We'd walked up a steep, but paved, path, and when we got to the top we saw these two women climbing up the very steep side of the hill. They didn't seem to need any assistance, but I climbed over the fence and went to lend a hand anyway.

It wasn't the first time we'd been impressed by the strong and apparently fearless Polish women. I only wish I had a picture of the elderly nun who hoisted my suitcase off a bus in Warsaw when I couldn't get it through the back door.
Posted by Kathleen at 1:00 PM