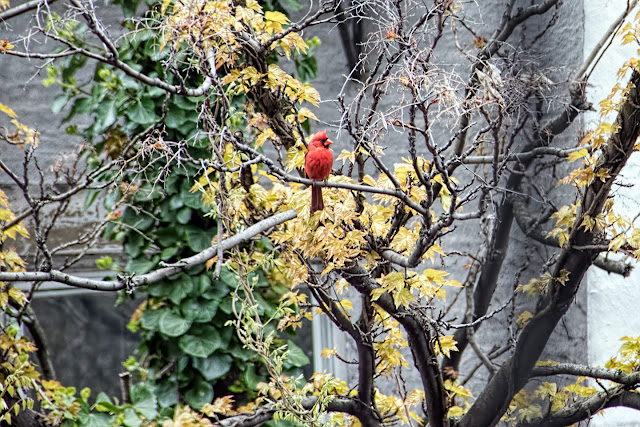 This cardinal showed up in the back yard this morning -- too far away to see clearly or to photograph without the long lens I didn't have time to get out, but there. Definitely there.

I'd just gotten off the phone with someone whose best friend died of Covid over the weekend. I knew him too, had worked with him for a couple of years. He was irascible, sometimes downright curmudgeonly, but also smart, funny and kind. He had a crush on me, and reportedly told people that he thought I was really beautiful (a minority opinion if there ever was one), so I still think of him fondly even though being his manager was often a nightmare.

I hadn't seen him in many years, and probably never would have seen him again, but it was still awful news and there was little consolation that I could offer except for fond reminiscences and a few funny stories.

And then this beautiful bird showed up and sang to me for a few minutes, and I smiled through my tears.