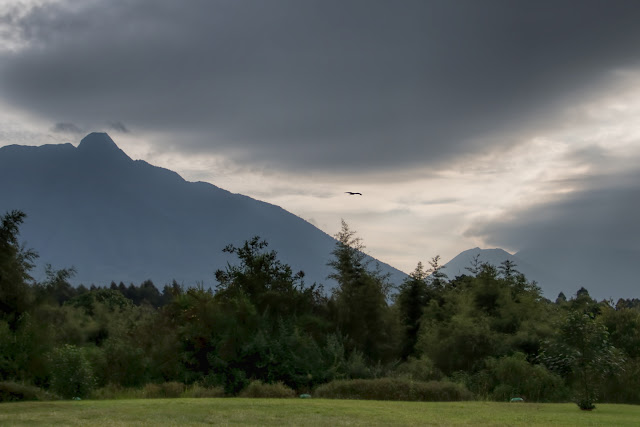 Neither destiny nor fate took me to Africa. Nor was it romance. I had a deep wish to see and live with wild animals in a world that hadn't yet been completely changed by humans. I guess I really wanted to go backward in time. From my childhood I believed that was what going to Africa would be, but by 1963, when I was first able to make a trip there, it was not that way anymore. There were only a few places other than the deserts and the swamps that hadn't been overrun by people. Almost at the end of my trip I found the place I had been looking for.

Right in the heart of central Africa, so high up that you shiver more than you sweat, are great, old volcanoes towering up almost fifteen thousand feet, and nearly covered with rich, green rain forest -- the Virungas.


This is a view of the mountains from our lodge outside Volcanoes National Park as one of the frequent and intense rainstorms swept in. (The bird is probably a black kite; there were often dozens of them wheeling through the Rwandan skies, even in Kigali.)

A few hours after being released from the hospital, I was in a Land Cruiser with my fellow travelers and our tour leader, Timothy, heading for the mountains. It's a three hour drive, over mostly well-paved roads better than what you find in much of the United States these days, but it's winding and mountainous -- Rwanda is called The Land of a Thousand Hills, and I'm reasonably certain they're being modest. The kites could probably cover the distance in half the time, avoiding all of the ups and downs and curves and switchbacks we mortals on the ground have to navigate, but it was a beautiful ride, and I felt better just sitting next to an open window watching Rwanda glide past.

There's little arable land, and the farmers plant in terraces carved into the hillsides; it reminded me of pictures I've seen of tea plantations in Asia. The roads are always full of people. On Sunday afternoon, many of them were coming from church and dressed for the occasion; others were working, pushing bicycles loaded with stacks of firewood or sacks of potatoes up the steep hills. Women balanced everything from baskets to purses to umbrellas on their heads, while children lugged huge yellow canisters of water after filling them from the wells.