In which I emulate Dian Fossey 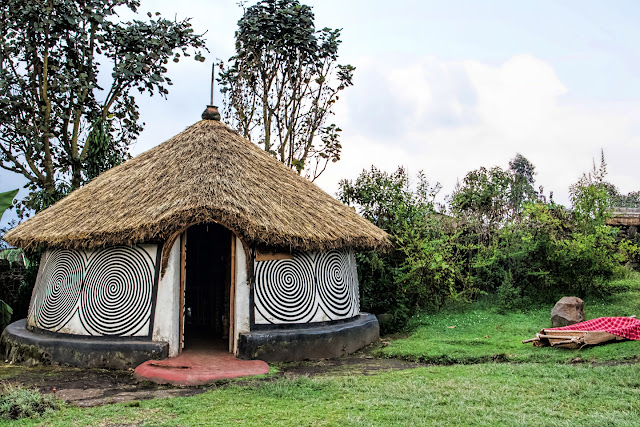 I was ordered to change clothes, then “allez!” out the door to a waiting teepoy -- an elongated basket affair with stout rims and handles manned by six Africans. I was trussed up into the basket along with piles of blankets, and before I could say kwa heri, the men began carting me off in such a silent and gentle way that I really had no sensation of movement beyond the passage of tree boughs over my head. It was a rather strange experience. I didn't really possess all of my faculties, and yet I was so aware of the silence of the porters and the sparkling, crisp beauty of the morning....

I was taken to the nearest hospital and checked in as a rabies patient by all the French-speaking doctors and nurses in Ruhengeri. No one spoke English and I guess I learned more French during the next three days than I'd learned during the past three years.


That's Dian Fossey, writing about the aftermath of being nipped by a wild dog -- and refusing to leave Karisoke until she started to show symptoms of rabies and had to be carried down the mountain for treatment. I don't think anyone ever described her as easy-going; on the contrary, like so many people who actually get things done in this world she was often a colossal pain in the ass.

I on the other hand have yet to bring a single species back from the brink of extinction, and I try hard -- maybe sometimes too hard -- not to be a pain in the ass. I knew I was going to have a hard time with the gorilla trek; I wasn't able to eat much and my legs felt as though I'd borrowed them from a different body and hadn't bothered to read the instruction manual. Everyone hires a porter to carry their gear; I figured if I hired two one could carry my backpack and one could assist me. But it quickly became obvious that I was struggling, and the tour leader suggested that I use a teepoy. I knew I was slowing the group down and we hadn't even started the serious climbing yet so I agreed.

Was it embarrassing? Oh my God -- totally. I'm still embarrassed.

But the embarrassment was mitigated by the knowledge that I could never have seen the gorillas otherwise, so I told myself that if Dian Fossey needed a teepoy when she was sick, who was I to turn it down?

(The picture is from the cultural village near the park. That's a teepoy on the ground to the right.)