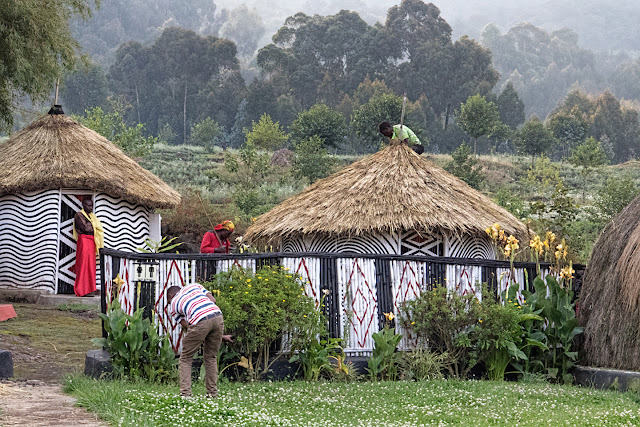 Edwin Sabuhoro founded this village in 2006. He had worked as a warden in Volcanoes National Park and was involved in rescuing a baby gorilla that poachers were trying to sell for $2000. The rescue was successful and the poachers were arrested.

I asked them, “Why are you doing this?,” he recalls, a question that was met with a sobering response. An old man I spoke to said: “If you live around here and you have 11 children like me, and they're starving to death and someone is going to give you $2,000 for a gorilla, or you know that there is an antelope that you can kill to feed them, would you do that? Would you do those things to feed your family? Or would you worry about the wildlife?”

The message from the village was clear; we do what we do because it is the only way we have to survive.

Sabuhoro quit his job as a park official, got a Master's in Conservation at the University of Kent, and decided to spend a year living with the poachers to understand their challenges. He created a program called “Turning Poachers to Farmers,” using his life savings to create small potato farms in the poaching communities. Within six months they had enough food to eat, with extra to sell, and were no longer relying on the park to feed themselves.

The cultural village is an extension of that program. There are exhibits on traditional Rwandan culture and crafts, music and dancing, and even a mock wedding. It provides jobs for local people -- many of whom are former poachers -- and all of the profits go back into the community. These staged heritage villages can be a little cringeworthy, but this was both fun and thought-provoking.

It's always useful for well-meaning Westerners to understand how complicated conservation can be. We all want to preserve the African elephants, for example, and it's easy to be outraged about threats to their existence from the safe vantage of the United States. Killing them for their ivory is obviously unforgivable. But what about if you're an African farmer trying to make a living? Elephants are incredibly destructive creatures -- they kill trees and trample crops. How do you protect them, but also protect the humans who live near them?

We see similar environmental issues on a much less critical scale in the U.S. as well. Coal mining is a good example. Coal is never coming back, no matter what the politicians promise. It's expensive and dirty, and it's as bad for the miners as it is for the environment. My mother's father and brothers were all coal miners in Ireland, so I'm definitely sympathetic to the miners and the communities that relied on it. The question is what do you replace it with? And how do you convince people who want the jobs they used to have that they have to find another way to make a living? And provide the jobs so they can do so?

I don't know the answers to any of this, but I'm grateful to Edwin Sabuhoro for coming up with a solution that seems to be working in Rwanda.