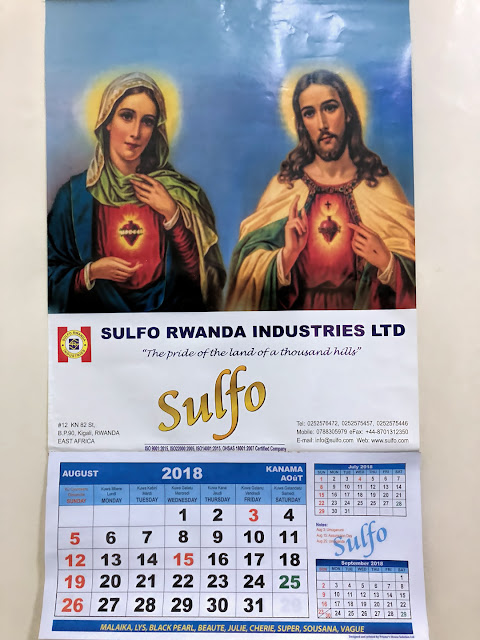 Apologies for the radio silence. I am back in New York and feeling much better, though perhaps not surprisingly suffering much more from jet lag than usual. I can't seem to sleep for more than three hours in a row, and so part of my brain seems to have trouble remembering which continent I'm on. I've panicked in the middle of brushing my teeth more than once -- Oh my God I forgot to use bottled water I'm going to die!

But I wanted to follow up on the previous post about language before moving on to the mountains, and the gorillas. This rather florid calendar adorned my hospital room in Kigali -- Rwanda is devoutly Catholic -- and while I was lying there I had ample opportunity to read it over and over again and wonder why it was in English when everyone I was dealing with in the hospital spoke only French (and presumably Kinyarwanda.) It was my first experience of dealing with medical issues in a foreign language, and I'm just lucky that it was French, the only language other than English in which I can say I'm nauseous or I don't need to vomit right now or No, my stomach doesn't hurt.

Which isn't to say that I could understand everything that was being said to me. Everyone was very kind, but all the strange faces leaning over me, speaking half-understood phrases or asking what seemed to be very important but unintelligible questions, made the experience oddly surreal.

(If you can ever use the word “surreal” to describe something as rudely physical as a massive malfunction of the digestive system, that is.)