While we're on the subject of lumasi 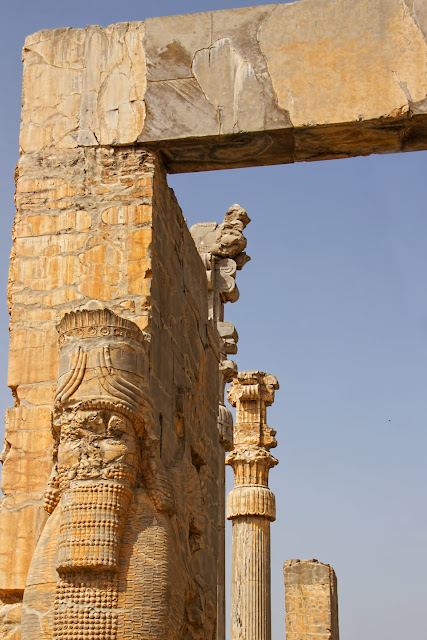 Versions of these are found in most of the ancient cultures of the Middle East -- here's a photo I never posted of the Gate of All Nations at Persepolis in Iran.

The damage here from millennia of exposure to the elements -- plus at least one angry army -- gives some weight to the British Museum's argument for keeping the Parthenon marbles. While actually walking through the ruins of Persepolis and seeing the stones in context was a once in a lifetime thrill, not that many of us get to go to Iran. And it's not likely that I'll ever go back.  But while I may never see the art of Persepolis again, I can take a bus uptown and see Assyrian art at the Metropolitan Museum any time I want.

When does protection become imperialism? Are they always the same thing?

It's complicated, obviously. Here's one more example: I knew that ancient Ninevah was somewhere in present-day Iraq, but I didn't realize until this last British Museum visit that it was on the outskirts of what is now Mosul.

Mosul was of course under the control of ISIS for much of the past several years. In addition to all the other havoc they created in the region, they destroyed all the statues of lumasi that had been left at the original site, as well as those in a local museum. So although I would have enjoyed visiting the ruins of Ninevah, the art would have been much safer outside of Iraq.