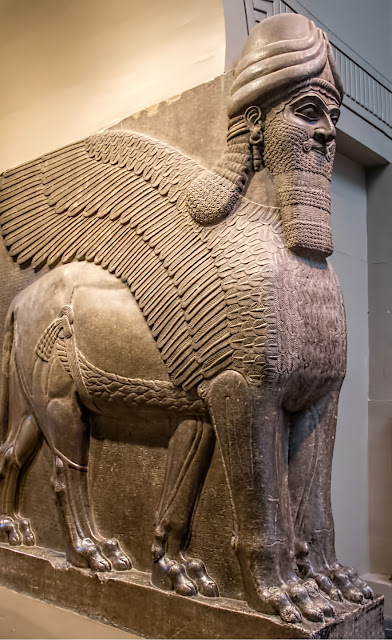 A lamassu was an Assyrian protective deity, usually regarded as female even though they had the heads of human males. The body might be either a lion or a bull, but they were always winged. Pairs of these statues flanked the entranceways at palaces.

My fascination with these creatures goes back to childhood -- one of my favorite books was All About Archaeology, which I borrowed from the library over and over again (thanks to the miracle of Amazon, I now own my very own copy!) It tells the stories of Heinrich Schliemann and Troy, Howard Carter and the tomb of King Tut, and Leonard Woolley and Ur, and one of the illustrations shows a statue similar to this being dragged on a sledge during the excavation of Ninevah.

There are examples in many of the major museums of the world, and I've been lucky enough to see them in the Louvre and the Metropolitan and the Pergamon, but these were the first. And they're still my favorites.

This particular statue guarded the throne room of Ashurnasirpal in the 9th century BC. You can't really tell the size from the picture, but it's almost 12 feet tall.
Posted by Kathleen at 10:41 AM