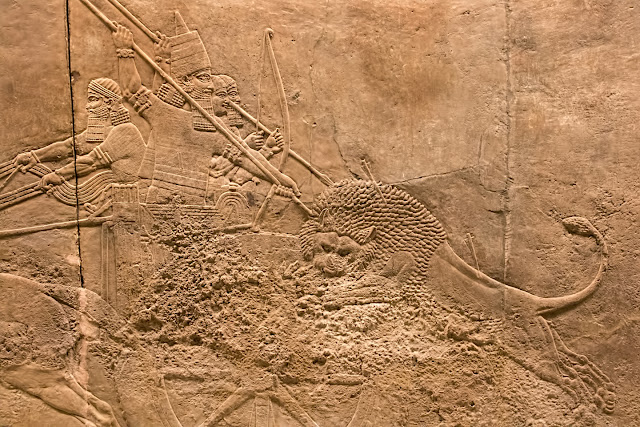 I must have seen these reliefs, from the North Palace of Ashurbanipal at Ninevah, before but I didn't remember them.

The royal seal of the Assyrian kings showed the king face to face with a lion, driving his sword through it, which symbolized his responsibility to protect his people from their enemies. In the mid-seventh century, the lions were more than just a symbolic threat. The records of Ashurbanipal report that “corpses of men, cattle and sheep lie in heaps as if the plague has killed them. Shepherds and herdsmen lament at what the lions have done. The villages are in mourning day and night.”

Clearly the king had to do something, and just as clearly it was more convenient, not to mention less risky, to have the lions brought to him. So this great lion hunt actually took place in an arena, where caged lions were released one at a time and the king killed them from a chariot.