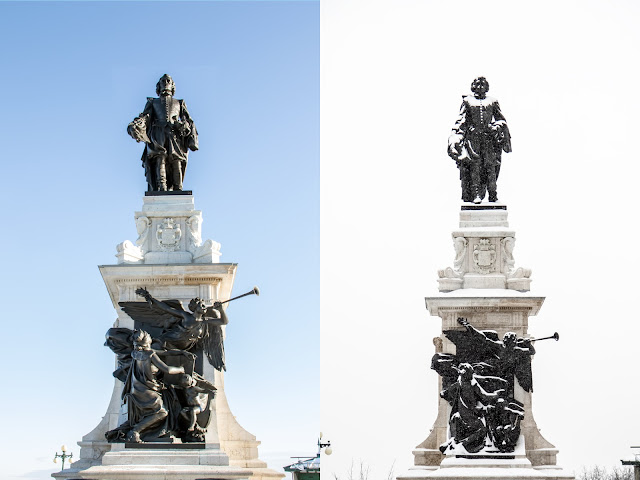 “It was of a man looking out over the city he'd founded four hundred years earlier.

Bare-headed, bold, stepping forward as though wanting to join them, to be a part of this city that existed only because he had. And at the base of the statue another, smaller, image. An angel, sounding a trumpet to the glory of the founder. And even Gamache, who was no great fan of nationalism, felt wonder, awe, at the unshakable vision and courage of this man to do what many had tried and failed.”
-- Louise Penny, Bury Your Dead

Several of us on the trip were reading, or re-reading, this book because it's set in Quebec City. I love doing that -- reading a Rebus book in Edinburgh, or a Brunetti book in Venice, or Stieg Larsson in Stockholm -- and it was great fun to walk past a cafe where Gamache had stopped for hot chocolate, or to sit in the Château Frontenac reading about his meeting with the Champlain Society there. (He was in a private dining room upstairs and I was in the Starbucks but it was still fun.)