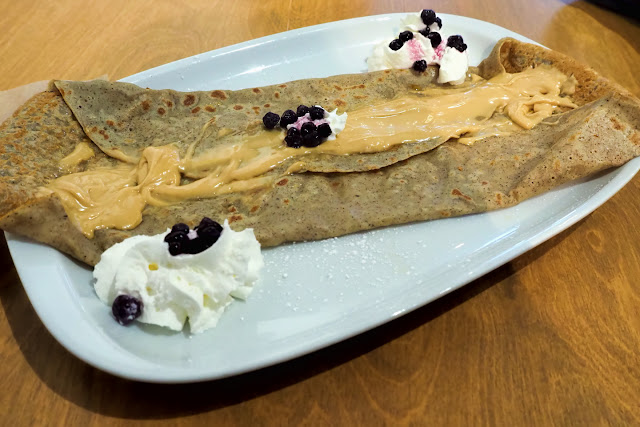 I'm a fan of good maple syrup, but only as an accompaniment to pancakes and waffles and the occasional slice of bacon.

French Canadians LOVE their sirop d'érable. It's served with fruit, it's cooked with vegetables, it's baked into pies. Some of these options are delicious -- maple works well with baked beans, for example. Others are highly dubious -- we had one dessert that combined maple with cheddar cheese, and I don't think those two flavors should even be in the same room together.

But I had never had maple butter before. It's light maple syrup, cooked until thick then whipped until creamy, and it's perfectly delicious in a buckwheat crepe or spread on toast. We had it on mini crepes during our food tasting walk a few days ago, and when I happened to walk by the cafe during one of our free afternoons I couldn't resist having another crepe.

It was enormous. It was delicious. Reader, I devoured it.