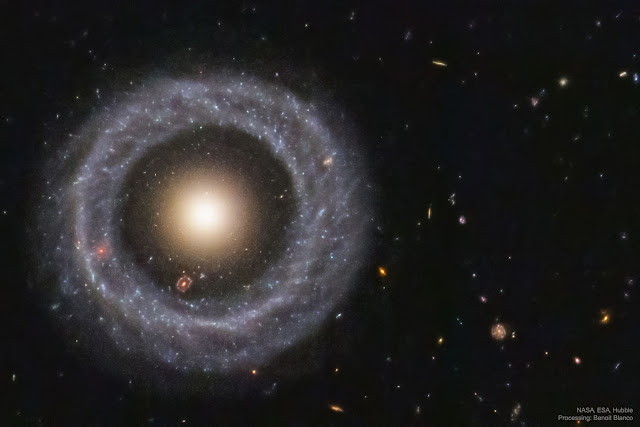 I didn't post any astronomy pictures for the first several years I did this blog, and I didn't start regular Astronomy Tuesdays until 2013. Still, that's hundreds of pictures and I don't remember most of them, so the first thing I do when selecting images now is to check if I've run anything similar before. (Not that anyone is likely to notice if I did, but still....)

The first two pictures that caught my eye for today turned out to be repeats.  Then I saw this one, and I knew immediately that it was new, that in fact I'd never seen anything quite like it before.

So may I present: Hoag's Object! This ring galaxy is unusual for the large gap between the old red stars at the core and the new blue stars in the outer ring. Astronomers aren't sure how it originated -- maybe a collision between galaxies, or maybe this was a barred galaxy that somehow lost its bars. And of course, I always love seeing more galaxies in the background; in this image there's even another ring galaxy visible in that dark gap at about seven o'clock.