Why I'm in Germany rather than Belgium 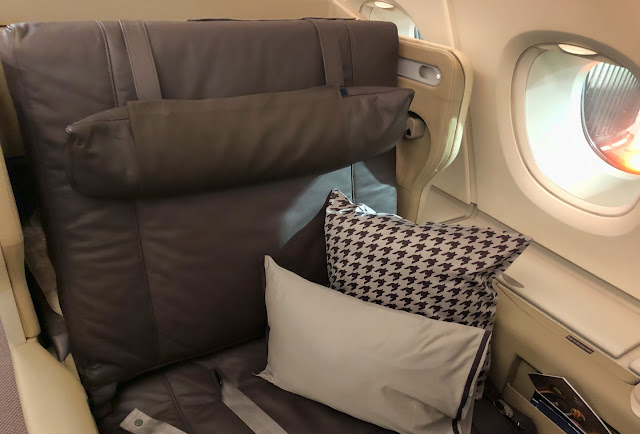 This was my seat on the Singapore Airlines flight from New York. The picture doesn't really show you the scale but it was approximately the width of three economy seats on a U.S. carrier (if you look closely, you can see the seat belt coming out of the leather next to the pillow -- there was at least an extra twelve inches of room on either side of the seat belt, handy for stashing the throw pillows.)

I first started looking for flights to Brussels six months ago, and they were ridiculously expensive, even for August -- $1700 in coach, one way! I put off booking, hoping that prices would come down, and when they didn't, started looking for alternatives -- Amsterdam? London? Nothing was any cheaper once you factored in the cost of a second flight or train to get to Brussels.

When I found this flight on Singapore Airlines, I didn't notice at first that the price was for business class rather than coach. Even with the cost of a night in Frankfurt and a train to Brussels the following day added in, it still cost less than a direct flight in coach. (I realized later that it was such a bargain because the flight continued on to Singapore and they probably had empty seats on the first leg that they wanted to fill up.)

So I'm in Frankfurt. And the Singapore Airlines experience was even more luxe than expected -- instead of Economy-Business-First, this flight had Economy-Business-Suites. The bathroom was large enough to walk around in, with bins of toothbrushes, razors and toiletries instead of the usual amenities bag, and there was a makeup mirror at every seat. The suites probably had Jacuzzis.

I didn't really sleep, despite taking an Ambien, but at least I was lying awake in an actual bed complete with sheet and duvet.