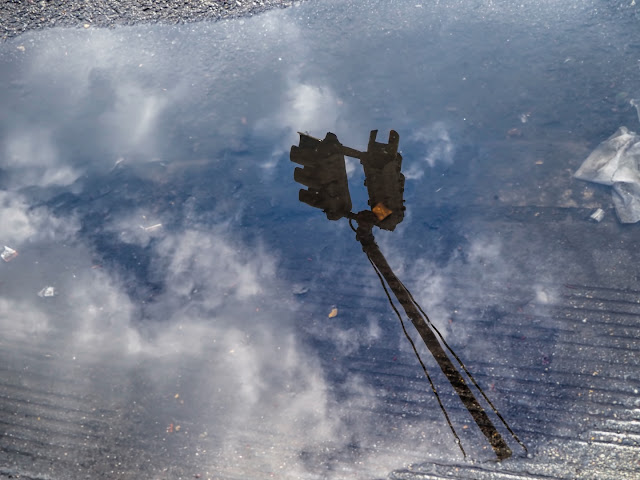 When I was small, I never wanted to step in puddles. Not because of any fear of drowned worms or wet stockings; I was by and large a grubby child, with a blissful disregard for filth of any kind.

It was because I couldn't bring myself to believe that that perfect smooth expanse was no more than a thin film of water over solid earth. I believed it was an opening into some fathomless space. Sometimes, seeing the tiny ripples caused by my approach, I thought the puddle impossibly deep, a bottomless sea in which the lazy coil of tentacle and gleam of scale lay hidden, with the threat of huge bodies and sharp teeth adrift and and silent in the far-down depths.

And then, looking down into reflection, I would see my own round face and frizzled hair against a featureless blue sweep and think instead that the puddle was the entrance to another sky. If I stepped in there, I would drop at once, and keep on falling, on and on, into blue space.

This is my last week at my job of 23 years, so I do feel on the brink of -- something. At the moment the anxiety about the huge changes coming is almost overwhelming, but there's excitement and anticipation as well. I'm going to be jumping into my puddles with both feet, fingers crossed, and hoping that if I do get soaked to the skin, it will be worth it.