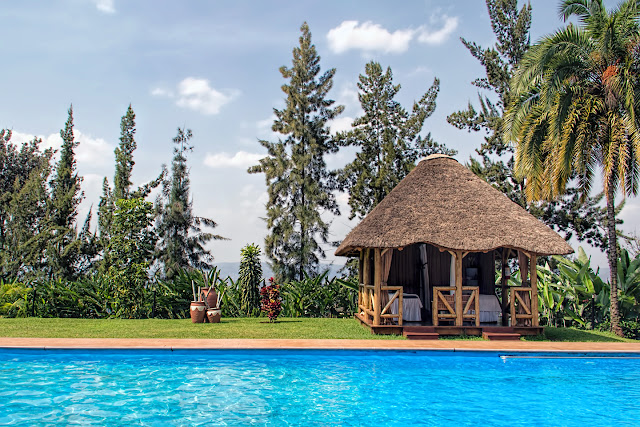 Kigali is in the same time zone as Brussels, so I can't claim jet lag, but I am tired. I had to get up at 5 in the morning to catch the train to the airport from Ghent yesterday, and though the Brussels Airlines flight was quite nice -- there was no shortage of chocolate -- it was still eight hours on a plane.

So I took advantage of having a completely unscheduled day. I went for a swim, read by the pool, had lunch. The other hotel guests at lunch were mostly African, except for a pair of missionaries at the next table who bitched endlessly about bosses and co-workers. (Apparently spreading the Word of God is as tediously bureaucratic as any other occupation.)

I went for a walk after lunch but the hotel is up in the hills overlooking the city, and there's not much to see in the neighborhood -- it's mostly a few large hotels amid nondescript office buildings; the liveliest crowd was at the corner gas station. Most people ignored me, but my tourist status was obvious and taxi drivers kept pulling over to offer me rides, and a series of men with identical piles of magazines and Kinyarwanda phrasebooks for sale materialized at my elbow at regular intervals. One young entrepreneur even offered to sell me a counterfeit passport.

I didn't take many pictures -- although I know Kigali is considered safe, phony passports for sale notwithstanding, it didn't seem prudent to flaunt an expensive camera until I had a better sense of my surroundings, so it mostly stayed in my bag.