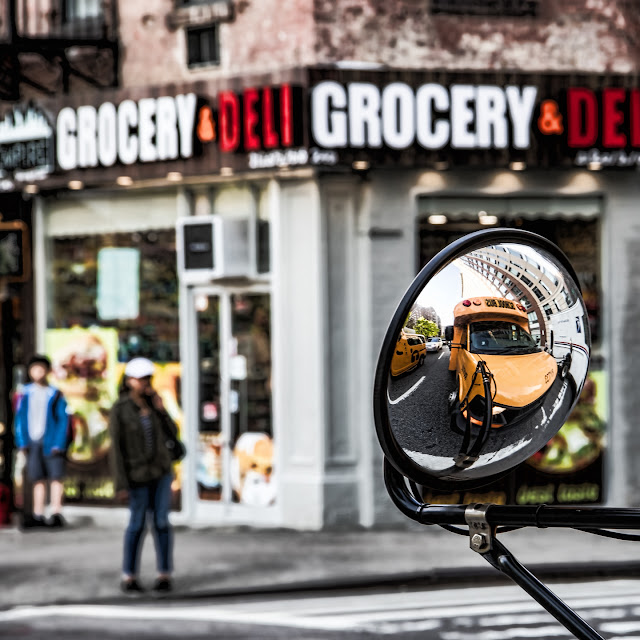 A school bus captured by the side mirror in a taxi.

It's supposed to rain all weekend, and I'm actually glad for the excuse to stay in and do as little as possible. Last weekend was a series of hectic First World problems, starting with losing my phone.

I'm not nearly as attached to my phone as many people I know; I work in IT, where having the latest, shiniest, newest everything is practically a religion, and I'd taken to making fun of my old beat-up phone in meetings by quoting the guy with the old flip phone in the GEICO commercial, “Why would I replace this? It's not broken.”

It was very slow -- I'd missed some of the slides I tried to take pictures of at the conference because the camera took so long to focus -- so when I realized it was gone, it was more of an annoyance than anything else. Okay, damn, but I needed a new phone anyway.

That took most of Saturday. It's not that simple to activate a new phone if you haven't got the old one and haven't memorized the billing PIN from your carrier, and I had to go from the Apple store to the Verizon store and then back to the Apple store. But by Saturday night I had a new working phone,  and when I used it to check my office voicemail I had a message from the Marriott in Brooklyn -- they'd found my old phone.

And there went Sunday.