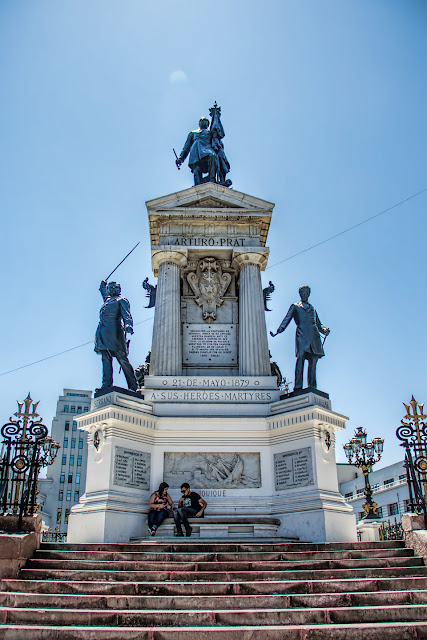 I have a few more pictures from Valparaiso, but this monument in Plaza Sotomayor makes a nice segue to Punta Arenas.

It commemorates the Battle of Iquique in 1879, a turning point in the War of the Pacific, which Chile fought against Peru and Bolivia.

You've never heard of the War of the Pacific? Neither had I. Like, I suspect, most norteamericanos, I am woefully ignorant of Latin American history. In school we covered the Incas and the Aztecs, and maybe Simon Bolivar, and that was it. I knew very little about Chilean history before this trip; about Chile's history prior to Allende and Pinochet, I knew, well, nada.

Chile lost this battle, by the way, but ultimately won the war. The date of the battle, May 21st, is a national holiday, Dia de las Glorias Navales. And Arturo Prat, who lost both his ship and his life, is a national hero -- he's the figure at the top of the monument.