It's tearing us apart 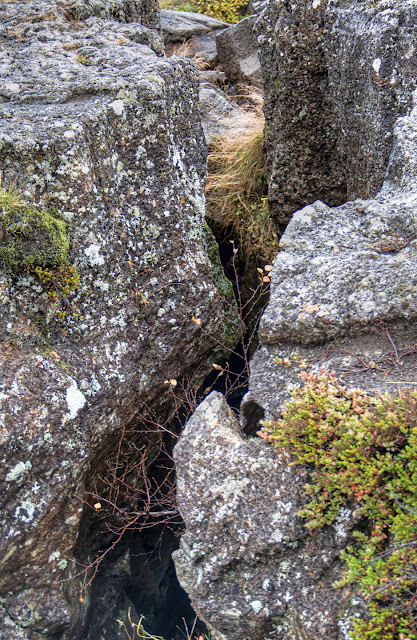 Anyone who remembers when the volcano Eyjafjallajökull erupted in 2010 and brought all air travel in Europe to a halt knows that Iceland is a temperamental teenager geologically speaking. But I hadn't realized that they have a volcanic eruption, on average, every five years, accompanied by months of earthquakes.

The landscape we saw yesterday reminded me a little of the Scottish Highlands -- lots of rocky crags -- and a little of Alaska -- lots of tundra-like moss, not so many trees. But there weren't a lot of mountains, which I had always assumed were a prerequisite for volcanoes.

Iceland is situated on the Mid-Atlantic ridge, where the North American and Eurasion plates meet. But unlike the Ring of Fire in the Pacific, where the plates are pushing into each other and creating huge mountains along with the volcanoes and earthquakes, these two plates are actually pulling apart. There's a rift valley splitting the country on the diagonal, and in the valley itself (here at Thingvellir) there are huge faults and fissures in the earth.
Posted by Kathleen at 10:38 PM