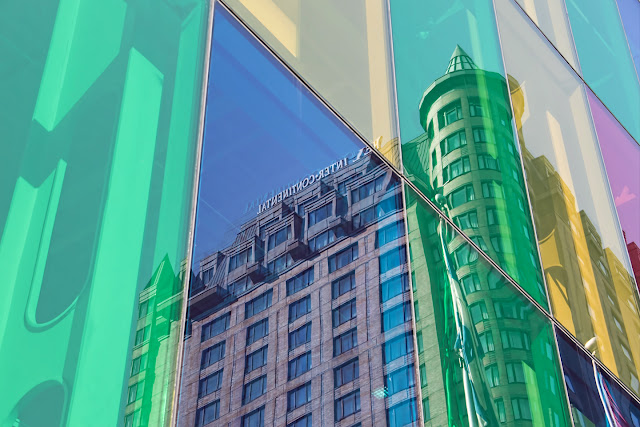 The Intercontinental Hotel in Montreal, reflected in candy colors in the windows of the Palais des congrès convention center across the street. That conical top to the hotel tower looks endearingly Canadian to me; the juxtaposition of old and new, staid and gaudy, seems very Montreal.

I'm only here for the three-day weekend, and I'm not sure how much blogging, or for that matter, photographing, will be taking place. It sounds so easy when you're planning it -- Hey, I'll go to Montreal -- it's only an hour away! It's an hour's flight, that's true, but when you throw in an airport that's under construction, flight delays, and the fact that half of the streets here appear to be closed for repairs, that one hour flight turns out to be the easy part of a seven-hour journey. (At least I didn't leave my passport lying on the kitchen counter.)

Then I walked for hours around the old town and the old port -- there was a festival, and what seemed to be hundreds of food carts along the river (the Fleuve Saint-Laurent, as we call it in these parts) and it was crowded and very hot and I'm exhausted. Dinner consisted of a very good chicken taco with fresh tortillas and ancho sauce and a squeeze of lime eaten at a picnic table in the shade while listening to a jug band play, after an appetizer of two beignets, freshly baked, one with vanilla creme filling and one with chocolate, and I will probably be asleep within the hour.