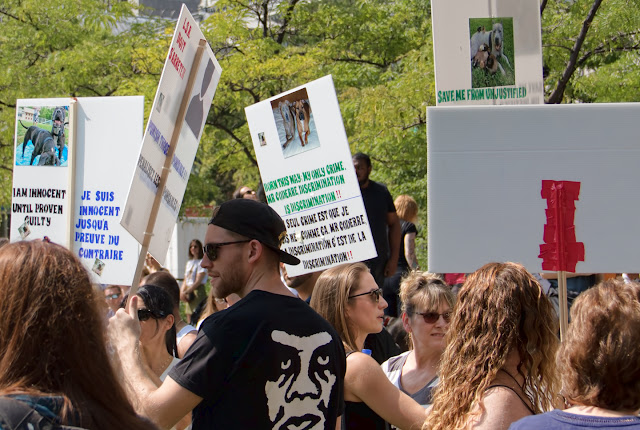 That's French for demonstration -- not that I could remember that, when I was actually standing in the middle of one. I had been sitting on a shady bench in the garden of the Chateau Ramezay, an 18th century building that's now a museum, when I became aware that something more than the usual crowd sounds were coming over the garden wall from Place Jacques-Cartier on the other side. I walked out through the garden gate and found myself in a very crowded but reasonably calm protest.


At first I thought it was charming that so many of the protesters brought their dogs; it gave a mellow, Sunday afternoon picnic vibe to the proceedings. Then I got close enough to read some of the signs and realized that it was a protest about dogs, specifically pit bulls, and the dogs were there to serve as character witnesses for the breed. 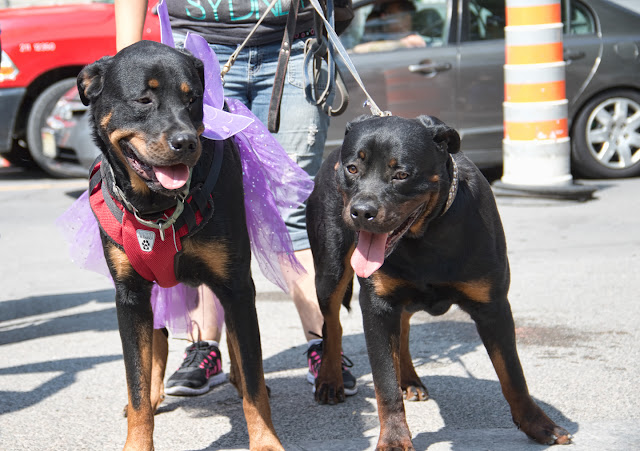 Which they did, admirably. The dogs were all laid back and well behaved, and many of them dressed up for the occasion -- you so rarely see a dog who can pull off a purple taffeta skirt, as this one did so beautifully.

But my favorite touch was that all of the protest signs were bilingual. They really wanted to make sure everyone got the message.
Posted by Kathleen at 9:46 PM