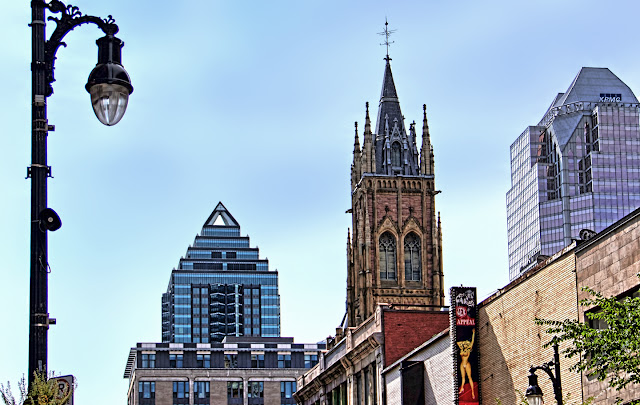 Home again, and feeling as though I'd been gone a lot longer than a weekend. (The return journey clocked in at less than six hours door to door and was hassle-free.)

I did manage to see quite a bit of the city in my one full day and two halves, and finally understood a little of its charm, in a way that completely eluded me on my only previous visit. Yes, you can eat crepes and speak French -- and if your French is as rusty as mine, you have the option of switching to English halfway through a sentence with the confidence that whoever you're speaking to will do the same.

But Montreal is not a beautiful city. Except for a few streets in the Old City, most of the older buildings are stolid nineteenth century Neoclassical, and there's little that's interesting or eye-catching in the modern architecture. A lot of the city is a little worn down, and some of it is downright shabby. There are beautiful parks and excellent transportation, but once you've had your crepes and looked around a little, it's easy to leave without regrets.

This is a bit of the skyline from rue Sainte-Catherine, the major shopping street downtown, home to all the big department stores. It's Montreal in a nutshell: modern glass corporate towers crammed next to a picturesque old church and a topless nightclub. It's a jumble, and that kind of juxtaposition is part of what gives Montreal its very real, if elusive, charm. It's bilingual in more than language.

And maybe that sense of living in multiple worlds, where you have Rue Sherbrooke and Avenue President Kennedy and Tunnel Atwater, with your word order properly French but the words themselves often English, inspires the whimsy and sense of play that in the end makes Montreal so much fun. Or maybe it's just the long harsh winters.

I don't pretend to know, not after a weekend. But I did like Montreal, very much, this time around. I'm glad I went back.