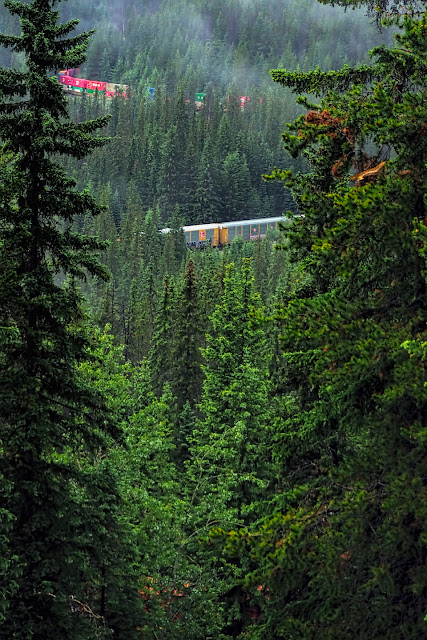 On the last afternoon of the trip, we crossed back into British Columbia into Yoho National Park. It was raining so the visuals were not as mesmerizing but we got to at least see a cloud behind which the strange and wonderful fossils of the Burgess Shale were found above Emerald Lake, and learn more about the building of the railroad across Canada.

This train near Kicking Horse Pass appears to be making an improbably sharp turn, but there's actually a very large spiral tunnel between the two sections of the train; the lower part is entering the tunnel and the cars above are emerging. (You can see a few more cars through the trees at the bottom of the picture -- this is one of those mile-long freight trains.)

The original track had been the steepest stretch of railroad track in North America, and there were frequent accidents. The solution was to dig two spiral tunnels through the mountains -- basically making a giant figure 8 of track, longer but not nearly as steep. Since they did this in 1909, without modern technology, it's a remarkable feat of engineering.

We'd stopped by the overlook on our way to Emerald Lake, learned the history, and admired one of the tunnel entrances through the downpour. As we approached the pass on our way back, there was a train approaching and our driver did a U-turn in the middle of the highway to get us back to the overlook just before the train emerged from the top of the tunnel. So here's one train times three in a single picture.