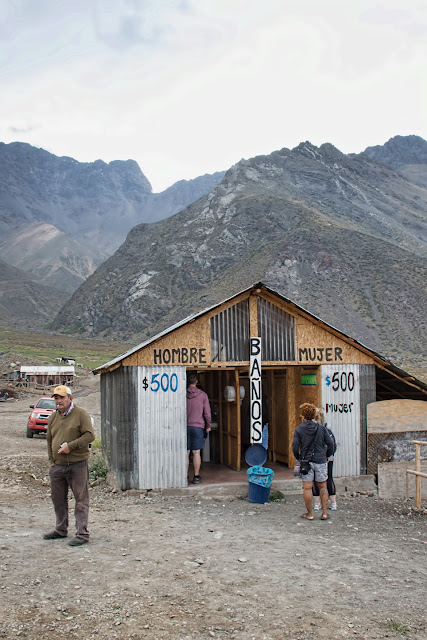 It didn't really cost five hundred dollars to pee at this rest stop near Cajon del Maipo in the high desert outside Santiago. Chile uses the dollar symbol for its currency, which takes some getting used to since the conversion rate was about 600 pesos to the dollar, making the prices look alarmingly high to an American brain. So the cost was actually 500 pesos, or a little less than one American dollar, which they also accepted.

And neither of which I had, unfortunately -- all of my dollars were back at the hotel, and the smallest bill I had was 20,000 pesos. I'd just flown in the day before, and all I'd bought was a coffee, which I had to pay for with a credit card because the cafe couldn't change 20,000 pesos either.

Fortunately the restaurant at this rest stop could, or it would have been an extremely uncomfortable trip to the cajon.
Posted by Kathleen at 11:10 AM