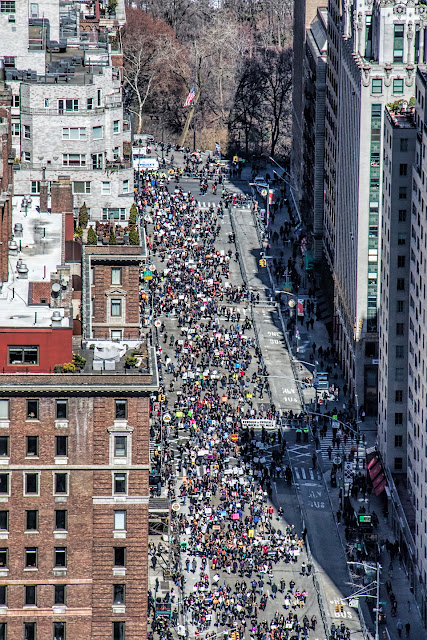 This is what democracy looks like: the New York March for our Lives heading down Sixth Avenue from Central Park.

I must admit, the march wasn't my first priority today -- going to Central Park for a last chance to catch the winter birds at their feeders was. I haven't been there since October; I had to work almost every weekend between Thanksgiving and New Year's and then I went to Antarctica. And since I've been back, the weather has been mostly too gray for bird photography.

But today was beautiful. Sunny, not too cold, great light. I woke up early, eager to take brilliant photos of what I was sure would be unusually cooperative birds. The rally/march started on Central Park West, and I could easily go there once I was done with the birds.

And then I got an email, followed by a text from my manager. You know those server issues we're having? That we were going to fix in two weeks? Turns out we did it last night and we need you to test this morning!

So instead of titmice and goldfinches, here's a photo taken from our company cafeteria of a very different source of comfort and inspiration.
Posted by Kathleen at 6:34 PM