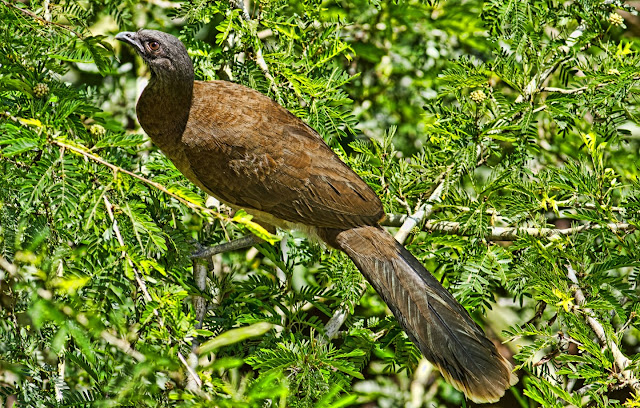 There's cozy warm, and then there's steamy jungle hot, where your lenses fog up the minute you leave the air conditioning and your own perspiration soaks you to the skin.

Like Panama, for example, where I found this strange creature. I didn't post it at the time because I had no idea what it was; I went through my field guide a couple of times and didn't see anything that resembled this. Finally I just Googled bird Panama long tail, and found it right away: a squirrel cuckoo.

And I went back to the field guide and saw why I'd passed it by -- the drawing in the book shows the bird from the front, which is much more colorful, while I only saw them from the back. It was the description of their behavior which clinched the ID, though; they're called squirrel cuckoos not just because of the long tails but because they move through trees like squirrels. There were several of them in the bushes at my hotel, running along the branches and eating the flowers, and they did look just like squirrels.

Typical behavior for a species never helps me much with mystery birds in Central Park, where I can basically divide the birds into two categories: 1. Those that hop on the ground. 2. Those that don't.