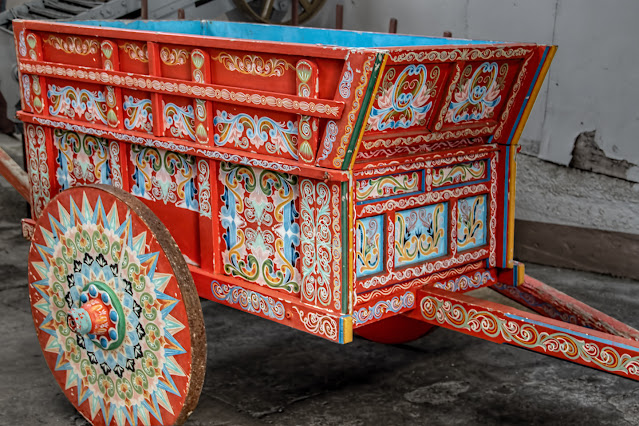 Oxcarts—called carretas in Costa Rica—have been used in rural communities around the world to transport goods, but these distinctive bright orange and red designs are unique to Costa Rica.

The tradition began when a farmer wanted to decorate his carreta so he could use it to take his family on Sunday outings, and he painted it orange because that was the only color paint he had. And then of course everybody wanted one. A highly decorated oxcart became a status symbol because it meant the family was wealthy enough to hire an artist, and different regions developed their own styles of decoration.

This carreta was at the Doka Estate Coffee Plantation in Alajuela.
Posted by Kathleen at 8:29 PM

la carreta menu
Fast food establishment La Carreta focuses in Mexican cuisine. Recently, they added superb and delectable tortas (sandwiches) to their menu. La Carreta is the ideal place to go to if you enjoy seafood. The restaurant features three or four specials every day. Weekday lunch specials include breaded pork chop, shrimp creole, and fried grouper for about $10. La Carreta is a great option for breakfast and late-night snacks in addition to quick, affordable meals for lunch or dinner. On the weekends, this eatery stays open till 5:00 AM.