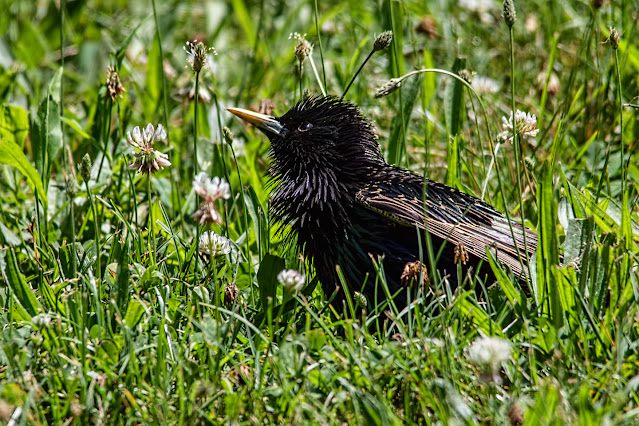 A damp and spiky-feathered starling in Central Park last week. That punky hairdo makes the starling look young to me, although it's an adult -- juvenile starlings are a dull brown without the iridescent feathers or distinctive white markings.
I am feeling, if not quite old, at least somewhat venerable these days. When I applied for this master's program I had visions of being decades older than everyone else in my classes, and was pleasantly surprised to find that the students have a broad range of ages and backgrounds and I'm not the only retiree looking for a new occupation.

But not in the Sociolinguistics class I am taking this summer, where most of the students are in their early to mid-twenties and I'm reasonably confident that I'm the only one over thirty.

It's been more amusing than anything else, though I am occasionally called upon by the professor to give the official old person perspective. For example, when we were discussing the degrees of formality of different ways of apologizing, I was asked if I would ever use “My bad.” I would and have, occasionally, but it sounds flippant to me while most of the other students thought it was informal but quite acceptable.

(Also, although they mostly remember 9/11, most of them were in preschool at the time. That's unnerving.)
Posted by Kathleen at 11:01 AM