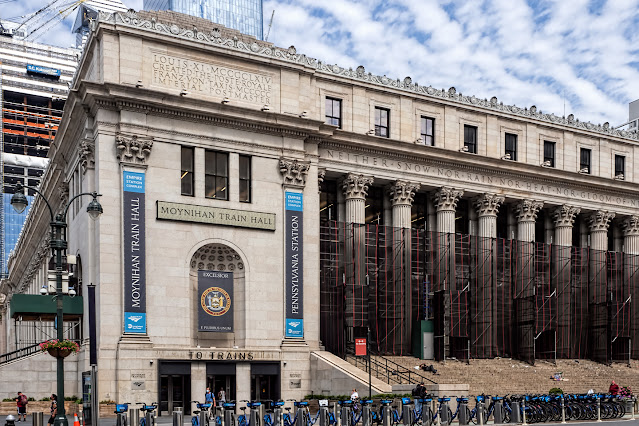 The old Pennsylvania Station vanished many years before I arrived in New York. The Beaux-Arts building was considered a masterpiece, but the decline of train travel and all that unused airspace above the station led to its being demolished in 1963, with a new Madison Square Garden and some nondescript office towers being built over a much smaller, completely charmless train station.

Our late Senator Daniel Patrick Moynihan used to be a shoeshine boy in Penn Station during the Depression, and he proposed turning part of the old Main Post Office building across Eighth Avenue into an annex of the station. That has finally been completed, and the new Moynihan Train Hall opened in January. When, of course, we were in the middle of one of the pandemic's many surges and I wasn't going anywhere I didn't have to.

I finally got to see it on my birthday, stopping in to take a few pictures on my way home from breakfast. I've always loved the Post Office building -- it was designed by McKim, Mead and White, the architects of the original Penn Station, and still has the old Post Office motto above the Corinthian columns: Neither snow nor rain nor heat nor gloom of night stays these couriers from the swift completion of their appointed rounds.
The retail spaces aren't open yet; with so many people still working from home, I'm not sure when they will be. But there were people there checking the schedules and dashing for their trains through the glass-roofed atrium. Not too many people -- I wasn't tempted to flee -- but enough to make it feel like New York, like home, full of the familiar hustle and hurry that is so much a part of life here. That maybe is coming back a little. That maybe can come back a little.
Posted by Kathleen at 9:13 PM