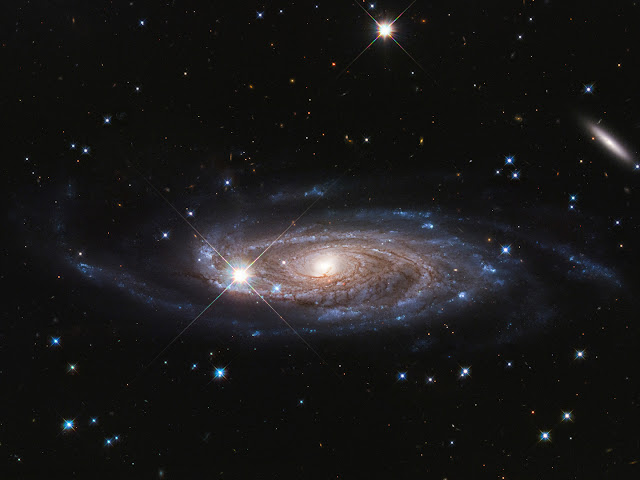 All the light we cannot see....

Well, most of us can see light, at least in the aptly named visible spectrum, but there's so much more that we can't see, not just the various frequencies of non-visible radiation, but also the dark matter that makes up so much of our universe. At least we have instruments that can see the non-visible forms of light for us. Dark matter not only can't be seen, we actually have no idea what it is.

UGC 2885 was one of the spiral galaxies whose rotation was studied by Vera Rubin in the Sixties. She found that the mass of the visible stars couldn't account for how fast the galaxy's stars were rotating around its center. Unless there was a large amount of matter that we couldn't see, the galaxies should have been flying apart. Thanks to her work, we now know that perhaps 80% of the universe consists of dark matter. This isn't just a new form of the matter we're used to -- protons, neutrons and electrons -- that's for some reason hard to see from Earth. It doesn't seem to interact with what we think of as matter at all, so it may consist of entirely new subatomic particles, almost a universe within a universe.

Think about that. We know so much about the universe, macro and micro, close up and impossibly far away, and yet 80% of it consists of something we know absolutely nothing about. We know it's there. And that's just about all we know.