The Andes from Santiago 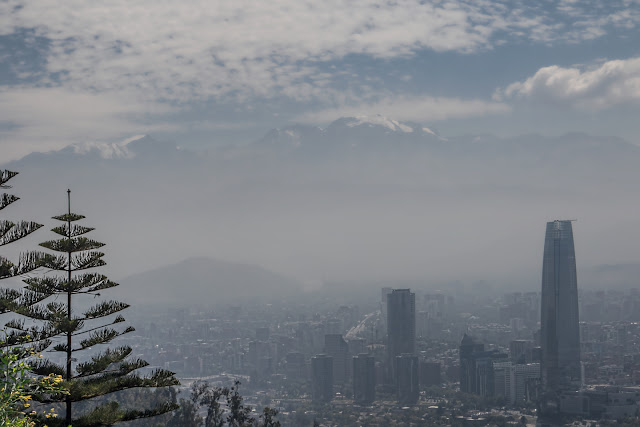 Santiago sits in a valley between the Western slopes of the Andes and the Pacific, and the mountains are visible from the city. Kind of. Sort of.

There's so much smog that from the streets the mountains aren't much more than a suggestion, a smudge against the horizon, a shadow between two buildings. I hadn't even realized that the higher peaks were visible from the city at all until this morning when I took this picture from the top of Cerro San Cristobal, a large hill in the Parque Metropolitano.

I hadn't planned to go there today, but the Pope is in town, a national holiday has been declared in his honor, and everything I did want to do was closed. (I was originally supposed to go to Cajon del Maipo today rather than yesterday -- this is probably why the tour operator changed days on me.) You  can climb the hill on foot, or take either a funicular or a teleferico (cable car.) I had thought I'd go up there on my return swing through the city after Antarctica, when I'll be staying close to where you get the funicular -- I'd walk if it wasn't too hot, and take the funicular if it was. I've never been crazy about dangling from a wire in a little car, even before learning yesterday that Chile is the second most seismically active country in the world after Japan. But I'm on the teleferico side of the park and I had a free morning so I did it.

I'd love to get a chance to see this view on a smog-free day but I do like how the mountains and the clouds blend together.