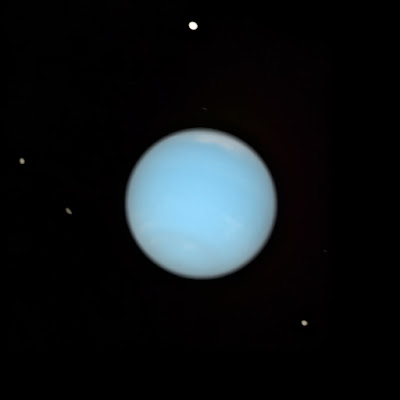 This is Neptune, photographed by the Hubbell telescope in 2005.

This photo shows what the ice giants look like in natural light, without the color filters used in the photo of Uranus I posted last week. Now that Pluto has been demoted, Neptune is officially the planet farthest from the sun -- more than 30 times farther than Earth. It's so far away that it can never be seen with the naked eye, and can barely be seen from Earth even with a powerful telescope. Because of this, it was the first planet discovered by physics rather than by observation, when Alexis Bouvard hypothesized that an unseen, very large planet was affecting the orbit of Uranus.

Neptune does have a ring system, though not as substantial or stable as that of Uranus and Saturn, and even the mighty Hubbell can't see them. And although it has 14 moons, only one, Triton, is large enough to have the gravity to form a spherical shape. The others are basically just big lumps of rock.
Posted by Kathleen at 6:00 AM