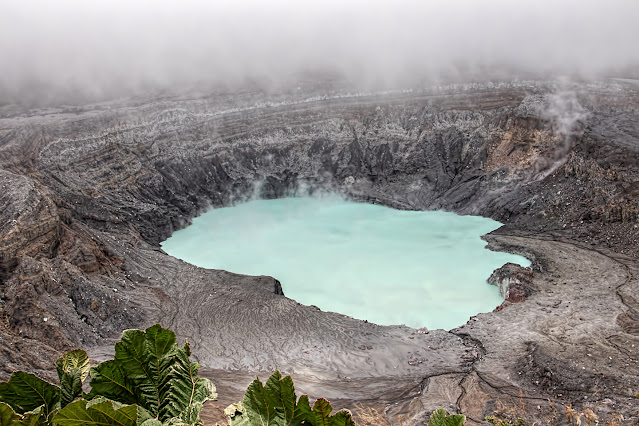 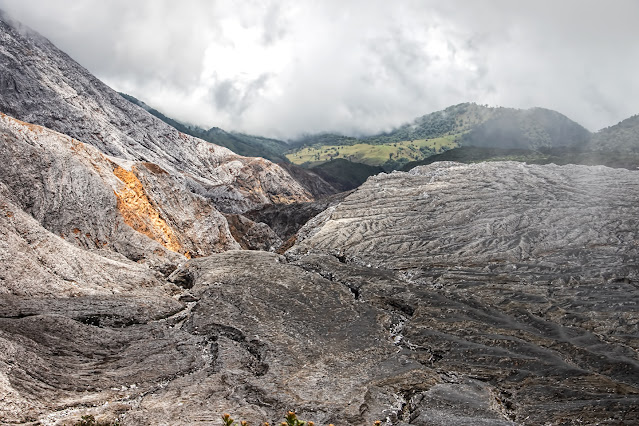 First, a word about the Costa Rican weather. It is variable in a way that London would envy; it rains every day, but fortunately not all day every day. Instead it drizzles for half an hour, then the sun comes out for an hour, then it pours, then it's cloudy for a few hours, then the sun comes out again. It is however extremely humid all the time—I don't think my hair has been completely dry since I left New York, and I had to do laundry yesterday after only five days because two showers a day really depleted my supply of clean underwear.

This means we were really lucky to actually see the crater during our excursion to Póas on Saturday. The professor directing our program had been there several times before but it had always been hidden by the mists. And as you can see in the pictures, although it was sunny when we arrived the fog was rolling in by the time we left.

Póas is an active volcano, so visits are limited to twenty minutes and there are concrete shelters on the viewing platforms in case of an unexpected eruption. You also have to wear hard hats; each tour group got hats in a different color, so the trail from the visitors center to the volcano was a sea of reds and yellows and whites bobbing along through the trees. The last major eruption was in 2017, which closed the park for eighteen months, and some of the trails are still closed. In the picture on the right, you can see the effect of the acid rain from the gases that are still being emitted.
Posted by Kathleen at 9:06 AM