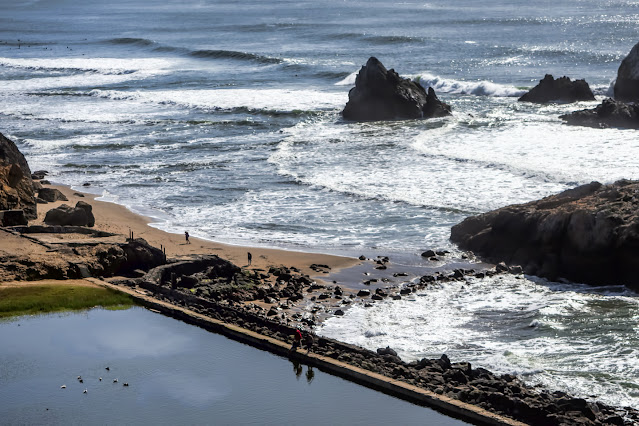 It's obviously a stretch to call this a reflection picture—a few faint clouds and two silhouettes in the water do not really qualify. But I'm in the middle of a take-home midterm this weekend and don't have time to look for something better.

These are the ruins of Sutro Baths, by Ocean Beach in San Francisco. The baths burned down in the Sixties, but I remember visiting when we were having special occasion meals at the Cliff House next door. There was a skating rink, and for some reason a mummy in a glass case, which I found both fascinating and terrifying. I never even realized there were actual baths there until after it had burned down and the ruins of the pools were exposed. We used to climb all over the ruins and the hills above when I was in high school; like so much else in San Francisco they've now been cleaned up and there are beautiful trails over the hills where we used to skid around on the bare rocks.
Posted by Kathleen at 9:46 PM