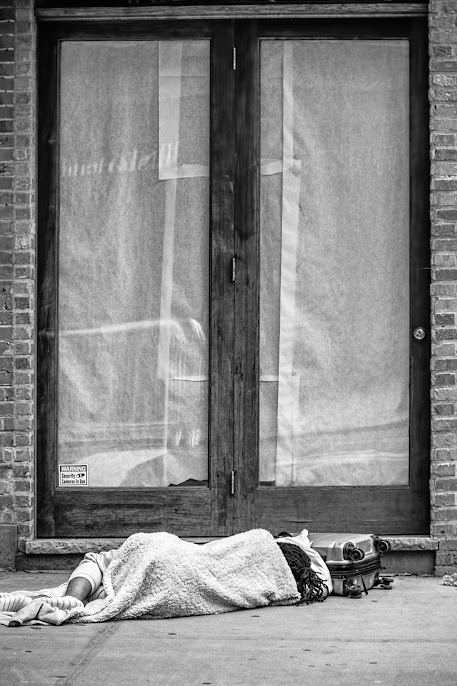 A woman sleeping in front of a closed restaurant on West 44th Street.
We're a long way from having this damn virus under control; partly because it's extremely contagious and partly because few governments are willing or able to take the draconian measures necessary. (Also, people are really, really stupid.)
China is currently reporting a dozen or so new cases daily, an impressive accomplishment and one that may only be possible if you're okay with literally sealing infected people in their apartments. But as the scientists fret about colder weather and flu season leading to a new surge in cases, one of many things that has me losing sleep is the economic impact.
So many jobs lost. So many businesses closed for good. And so many people convinced that you can somehow save the world economy without getting the virus under control first. (Have I mentioned that people are really, really stupid?)
American Airlines just offered me a bonus of 2000 extra miles if I booked a flight now. I wouldn't even get on a crosstown bus, and they think I'm going to get on a plane for a measly incentive like 2000 miles? And where, exactly, would I go? Americans are currently unwelcome in almost every country of the world, and cases are on the rise in 31 states.
I'm worried there's going to be a global depression, and it's going to be a long one. And that by the time we can finally leave home again, there won't be anywhere left to go.
Posted by Kathleen at 8:44 PM