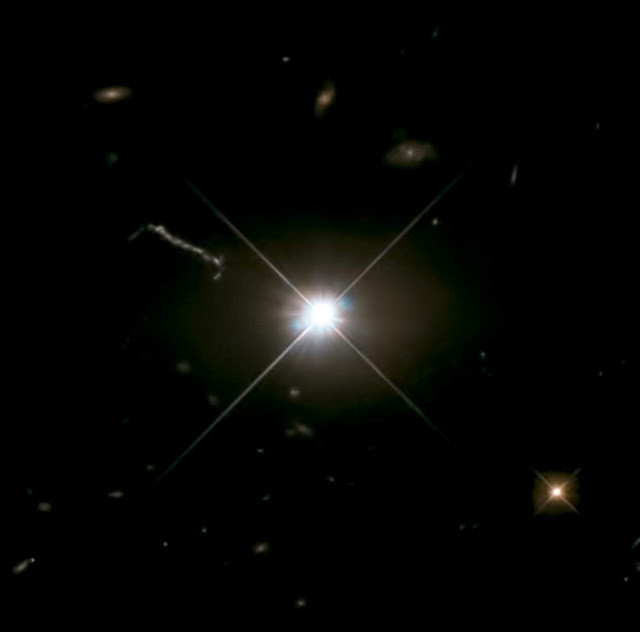 This is 3C 273, an object much more interesting than this Hubble image suggests.

Quasars (the name was originally derived from quasi-stellar radio source) were originally discovered in the 1950's when astronomers were using radio emissions as a new tool for investigating the universe. They found hundreds of objects that were emitting large amounts of radiation but either were invisible optically, or appeared as a very faint star.

When I was taking astronomy classes in college, quasars were still a mystery. The large redshift in the radiation they emitted suggested that they were very far away and moving very fast, maybe proto-galaxies at the very edge of the expanding universe.

Now more than 200,000 quasars have been identified, and we know that they consist of supermassive black holes surrounded by a disc of gas. As the gas falls into the black hole, enormous amounts of energy are released; the largest quasars are thousands of times more luminous than a galaxy like the Milky Way.

Finally, I have to admit that I am also old enough that I can't see the word quasar without thinking of the line of Motorola TV's by that name.

Credit: ESA/Hubble and NASA
Posted by Kathleen at 12:15 PM