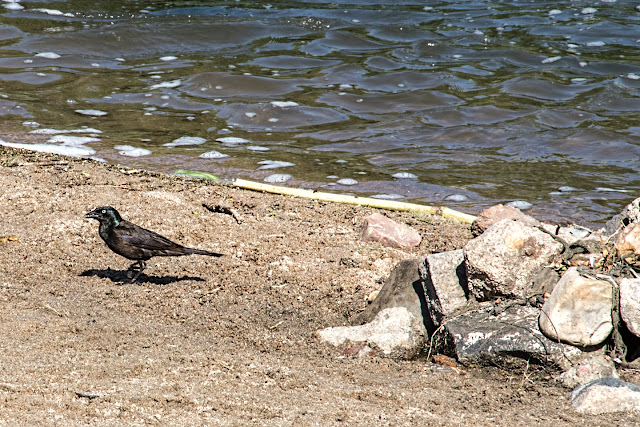 This is a crappy picture, but it's all you're going to get this morning -- a Brewer's blackbird in Riverfront Park in Denver earlier today.

After writing earlier this week that I sometimes wondered why I want to be anywhere other than New York as often as I do, it was ironic that I spent so much of yesterday wishing that I'd just stayed there. I was supposed to get to Denver at 11:45 am; I actually arrived almost eleven hours late, after mechanical problems on the first plane, having to go standby on the second, and terrible storms over Denver that had us circling in turbulence for an hour until our fuel was dangerously low and we were diverted to Albuquerque to wait out the weather and refuel.

I'd woken up at 3 am to test servers for work so I was tired before I even left for the airport, and by the time I found myself wandering blearily through the baggage claim area looking in vain for the suitcase I'd been forced to check because I was the last one they let on the plane, I'd been awake for close to 24 hours and my last meal had been an inadequate salad at Newark airport in what felt like a different lifetime.

I didn't sleep long or well, which is why I'm having trouble writing coherent sentences. I've had one breakfast, but I think I could use another one. Then I'm going to visit some museums and go to bed early. Tomorrow I'm spending the day in the mountains.