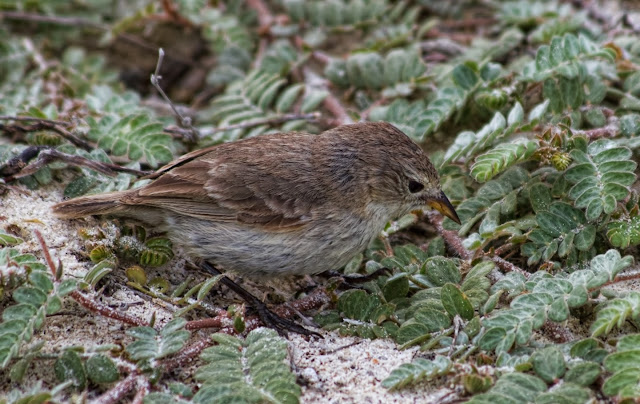 A warbler finch on Espanola.

There's one species of flycatcher in the Galapagos, and that's what I assumed this was at first -- it looks a little like a least flycatcher -- but that short stubby tail means it's one of Darwin's finches.

Unlike the mockingbirds, where each species is limited to a particular island, the finches occupy particular ecological niches, and the beaks of the various species and subspecies allow them to live side by side without competing for food. A finch with a bigger beak eats the cactus fruit, for example, while a finch with a smaller beak eats the base of the cactus plant. And those small pointed warbler finch beaks are perfect for catching insects, which is what this bird was focused on when I saw it.
Posted by Kathleen at 6:00 AM